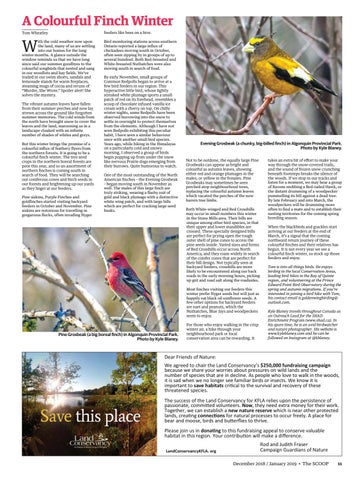 ith the cold weather now upon the land, many of us are settling into our homes for the long winter months. A glance outside the window reminds us that we have long since said our summer goodbyes to the colourful songbirds that nested and sang in our woodlots and hay fields. We’ve traded in our swim shorts, sandals and lemonade stands for warm fireplaces, steaming mugs of cocoa and reruns of “Murder, She Wrote.” Spoiler alert! She solves the mystery.

Bird monitoring stations across southern Ontario reported a large influx of chickadees moving south in October, often seen zipping by in groups of up to several hundred. Both Red-breasted and White-breasted Nuthatches were also moving south in search of food.

The vibrant autumn leaves have fallen from their summer perches and now lay strewn across the ground like forgotten summer memories. The cold winds from the north have brought snow to cover the leaves and the land, marooning us in a landscape cloaked with an infinite number of shades of whites and greys. But this winter brings the promise of a colourful influx of feathery flyers from the northern forests. It is going to be a colourful finch winter. The tree seed crops in the northern boreal forests are poor this year, and so an assortment of northern finches is coming south in search of food. They will be searching out coniferous cones and birch seeds in our forests and brightening up our yards as they linger at our feeders. Pine siskins, Purple Finches and goldfinches started visiting backyard feeders in October and November. Pine siskins are notorious for travelling in gregarious flocks, often invading Nyger

By early November, small groups of Common Redpolls began to arrive at a few bird feeders in our region. This hyperactive little bird, whose lightly streaked white plumage sports a small patch of red on its forehead, resembles a scoop of chocolate infused vanilla ice cream with a cherry on top. On chilly winter nights, some Redpolls have been observed burrowing into the snow to settle in overnight to protect themselves from the elements. Although I have not seen Redpolls exhibiting this peculiar habit, I have seen a similar behaviour once with another small bird species. Years ago, while hiking in the Himalayas on a particularly cold and snowy morning, I observed a group of birds begin popping up from under the snow like nervous Prairie dogs emerging from their burrows. Quite humorous to watch. One of the most outstanding of the North American finches – the Evening Grosbeak – began moving south in November as well. The males of this large finch are truly striking, wearing a flashy suit of gold and black plumage with a distinctive white wing patch, and with large bills which are perfect for cracking large seed husks.

Evening Grosbeak (a chunky, big-billed finch) in Algonquin Provincial Park. Photo by Kyle Blaney. Not to be outdone, the equally large Pine Grosbeaks can appear as bright and colourful as autumn leaves, showing either red and orange plumages in the males, or yellow in the females. Pine Grosbeaks may sometimes be seen perched atop neighbourhood trees, replacing the colourful autumn leaves which vacated the perches of the now barren tree limbs. Both White-winged and Red Crossbills may occur in small numbers this winter in the Stone Mills area. Their bills are unique among other bird species, in that their upper and lower mandibles are crossed. These specially designed bills are perfect for prying open the tough outer shell of pine cones to access the pine seeds inside. Varied sizes and forms of Red Crossbills occur across North America, and they roam widely in search of the conifer cones that are perfect for their bill design. Not typically seen at backyard feeders, crossbills are more likely to be encountered along our back roads in the early morning hours, picking up grit and road salt along the roadsides. Most finches visiting our feeders this winter prefer Nyger seeds but will just as happily eat black oil sunflower seeds. A few other options for backyard feeders are suet and peanuts, which the Nuthatches, Blue Jays and woodpeckers seem to enjoy.

For those who enjoy walking in the crisp winter air, a hike through your neighbourhood park or local conservation area can be rewarding. It

takes an extra bit of effort to make your way through the snow-covered trails, and the sound of frozen snow crunching beneath footsteps breaks the silence of the woods. If we stop in our tracks and listen for a moment, we may hear a group of Ravens mobbing a Red-tailed Hawk, or the distant drumming of a woodpecker pummelling its bill against a dead tree. By late February and into March, the woodpeckers will be drumming more often to find a mate and to establish their nesting territories for the coming spring breeding season. When the blackbirds and grackles start arriving at our feeders at the end of March, it’s a signal that the coming northward return journey of these colourful finches and their relatives has begun. It is not every year we see a colourful finch winter, so stock up those feeders and enjoy. Tom is into all things birds. He enjoys birding in the local Conservation Areas, leading bird hikes in the Bay of Quinte region, and volunteering at the Prince Edward Point Bird Observatory during the spring and autumn migrations. If you’re interested in joining a bird hike with Tom, his contact email is goldenwingbirding@ outlook.com. Kyle Blaney travels throughout Canada as an Outreach Lead for the SHAD Enrichment Program (www.shad.ca). In his spare time, he is an avid birdwatcher and nature photographer. His website is www.kyleblaney.com and he can be followed on Instagram at @kblaney.

Dear Friends of Nature: We agreed to chair the Land Conservancy’s $250,000 fundraising campaign because we share your worries about pressures on wild lands and the number of species that are in decline. As people who love to walk in the woods, it is sad when we no longer see familiar birds or insects. We know it is important to save habitats cri�cal to the survival and recovery of these threatened species. The success of the Land Conservancy for KFLA relies upon the persistence of passionate, commi�ed volunteers. Now, they need extra money for their work. Together, we can establish a new nature reserve which is near other protected lands, crea�ng connec�ons for natural processes to occur freely. A place for bear and moose, birds and bu�erﬂies to thrive. Please join us in dona�ng to this fundraising appeal to conserve valuable habitat in this region. Your contribu�on will make a diﬀerence. LandConservancyKFLA. org