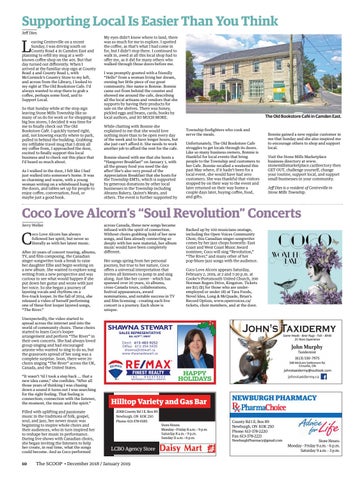 Supporting Local Is Easier Than You Think Jeff Dies

eaving Centreville on a recent Sunday, I was driving south on County Road 4 in Camden East and planning to refill my mug at a wellknown coffee shop on the 401. But that day turned out differently. When I arrived at the familiar stop sign at County Road 4 and County Road 1, with McCormick’s Country Store to my left, and across from the Library, I looked to my right at The Old Bookstore Cafe. I’d always wanted to stop there to grab a coffee, perhaps some food, and to Support Local. So that Sunday while at the stop sign leaving Stone Mills Township like so many of us do for work or for shopping at big box stores, I decided it was time for me to finally check out The Old Bookstore Café. I quickly turned right, and, not knowing exactly where to park, pulled in behind the building. Grabbing my refillable travel mug that I drink all my coffee from, I approached the door, excited to finally support this local business and to check out this place that I’d heard so much about. As I walked in the door, I felt like I had just walked into someone’s home. It was so charming and warm, with a young woman writing on a whiteboard hung by the doors, and tables set up for people to enjoy coffee, conversation, food, or maybe just a good book.

My eyes didn’t know where to land, there was so much for me to explore. I spotted the coffee, as that’s what I had come in for, but I didn’t stop there. I continued to walk in, awed at all this local shop had to offer me, as it did for many others who walked through those doors before me. I was promptly greeted with a friendly “Hello” from a woman living her dream, owning her little piece of our great community. Her name is Bonnie. Bonnie came out from behind the counter and showed me around the cafe, describing all the local artisans and vendors that she supports by having their products for sale on the shelves. There was honey, pickled eggs and beans, cards, books by local authors, and SO MUCH MORE. While chatting with Bonnie she explained to me that she would love nothing more than to be open every day of the week and to have longer hours, but she just can’t afford it. She needs to work another job to afford the rent for the cafe. Bonnie shared with me that she hosts a “Hangover Breakfast” on January 1, with all the greasy food you need the day after! She’s also very proud of the Appreciation Breakfast that she hosts for the Township EMTs, which is supported by generous donations by other local businesses in the Township including Abrams Bakery, Quinn’s Meats, and others. The event is further supported by

The Old Bookstore Café in Camden East. Township firefighters who cook and serve the meals. Unfortunately, The Old Bookstore Cafe struggles to get locals through its doors. Like so many business owners, Bonnie is thankful for local events that bring people to the Township and customers to her Cafe. Bonnie recalled a weekend this past May where, if it hadn’t been for a local event, she would have had zero customers. She was thankful that visitors stopped by on their way to the event and later returned on their way home a couple days later, buying coffee, food, and gifts.

Bonnie gained a new regular customer in me that Sunday and she also inspired me to encourage others to shop and support local. Visit the Stone Mills Marketplace business directory at www. stonemillsmarketplace.ca/directory then GET OUT, challenge yourself, change your routine, support local, and support small businesses in your community. Jeﬀ Dies is a resident of Centreville in Stone Mills Township.

oco Love Alcorn has always followed her spirit, but never so literally as with her latest music.

After 20 years of concert touring, albums, TV, and film composing, the Canadian singer-songwriter took a break to raise her daughter Ellie and begin working on a new album. She wanted to explore song writing from a new perspective and was curious to see what would happen if she put down her guitar and wrote with just her voice. So she began a journey of layering vocals and rhythms on a five-track looper. In the fall of 2014, she released a video of herself performing one of these first looper layered songs, “The River.”

across Canada, these new songs became infused with the spirit of connection. Without choirs grabbing hold of her new songs, and fans already connecting so deeply with her new material, her album music would have been completely different. Her songs spring from her personal journey, but true to her nature, Coco offers a universal interpretation that invites all listeners to jump in and sing along. Just like her career - which has spanned over 20 years, 10 albums, cross-Canada tours, collaborations, festival appearances, award nominations, and notable success in TV and film licensing - creating each live concert is a journey. Each show is unique.

Unexpectedly, the video started to spread across the internet and into the world of community choirs. These choirs started to learn Coco’s looper arrangement and perform “The River” in their own concerts. She had always loved group singing and had encouraged anyone who wanted to sing to do so, but the grassroots spread of her song was a complete surprise. Soon, there were 20 choirs singing “The River” across the UK, Canada, and the United States. “It wasn’t ‘til I took a step back ... that a new idea came,” she confides. “After all those years of thinking I was chasing down a sound it turns out I was searching for the right feeling. That feeling is connection; connection with the listener, the moment, the music and the spirit.” Filled with uplifting and passionate music in the traditions of folk, gospel, soul, and jazz, her newer music was beginning to inspire whole choirs and their audiences, who in turn inspired her to reshape her music in performance. During live shows with Canadian choirs, she began inviting the listeners to help her create, in real time, what the songs could become. And as Coco performed

Backed up by 100 musicians onstage, including the Open Voices Community Choir, this Canadian singer-songwriter comes by her jazz chops honestly: East Coast and West Coast Music Award nominee, Coco will sing “Revolution,” “The River,” and many other of her pop-blues-jazz songs with the audience. Coco Love Alcorn appears Saturday, February 2, 2019, at 2 and 7:30 p.m. at Cooke’s-Portsmouth United Church, 200 Norman Rogers Drive, Kingston. Tickets are $15 ($5 for those who are underemployed or under 18) at Tara Foods, Novel Idea, Long & McQuade, Brian’s Record Option, www.openvoices.ca/ tickets, choir members, and at the door.