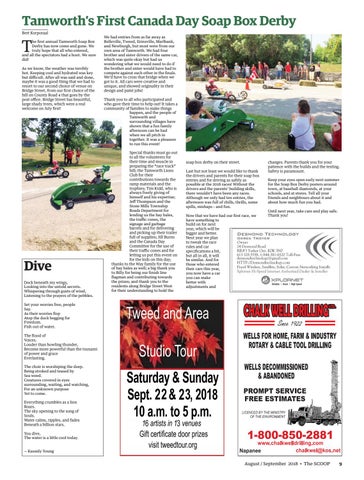 he first annual Tamworth Soap Box Derby has now come and gone. We truly hope that all who entered, and all the spectators had a hoot. We sure did! As we know, the weather was terribly hot. Keeping cool and hydrated was key but difficult. After all was said and done, maybe it was a good thing that we had to resort to our second choice of venue on Bridge Street, from our first choice of the hill on County Road 4 that goes by the post office. Bridge Street has beautiful, large shady trees, which were a real welcome on July first!

Dive Dock beneath my wings, Looking into the untold secrets. Whispering through gusts of wind, Listening to the prayers of the pebbles.

We had entries from as far away as Belleville, Tweed, Erinsville, Marlbank, and Newburgh, but most were from our own area of Tamworth. We had four brother and sister drivers of the same car, which was quite okay but had us wondering what we would need to do if the brother and sister would have had to compete against each other in the finals. We’d have to cross that bridge when we got to it. All cars were creative and unique, and showed originality in their design and paint jobs! Thank you to all who participated and who gave their time to help out! It takes a community of families to make things happen, and the people of Tamworth and surrounding villages have shown that a fun family afternoon can be had when we all pitch in together. It was a pleasure to run this event! Special thanks must go out to all the volunteers for their time and muscle in preparing the “race track” hill; the Tamworth Lions Club for their contributions towards the ramp materials and the trophies; Tim Kidd, who is always freely giving of himself and his expertise; Jeff Thompson and the Stone Mills Township Roads Department for lending us the hay bales, the traffic cones, the signage and garbage barrels and for delivering and picking up their trailer full of supplies; Jill Burns and the Canada Day Committee for the use of their traffic cones and for letting us put this event on for the kids on this day; thanks to the Way family for the use of hay bales as well; a big thank you to Billy for being our finish line flagman and contributing towards the prizes; and thank you to the residents along Bridge Street West for their understanding to hold the

soap box derby on their street. Last but not least we would like to thank the drivers and parents for their soap box entries and for driving as safely as possible at the 2018 races! Without the drivers and the parents’ building skills, there wouldn’t have been any races. Although we only had ten entries, the afternoon was full of chills, thrills, some spills, mishaps – and fun. Now that we have had our first race, we have something to build on for next year, which will be bigger and better. Next year we plan to tweak the race rules and car specifications a bit, but all in all, it will be similar. And for those who entered their cars this year, you now have a car you can make better with adjustments and

changes. Parents thank you for your patience with the builds and the testing. Safety is paramount. Keep your eyes open early next summer for the Soap Box Derby posters around town, at baseball diamonds, at your schools, and at stores. Tell all your friends and neighbours about it and about how much fun you had. Until next year, take care and play safe. Thank you!

Set your worries free, people Say. As their worries flop Atop the dock begging for Freedom. Fish out of water. The flood of Voices. Louder than howling thunder, Become more powerful than the tsunami of power and grace Everlasting. The choir is worshiping the deep. Being stroked and teased by Sea weed. Creatures covered in eyes surrounding, waiting, and watching, For an unknown purpose Yet to come. Everything crumbles as a lion Roars. The sky opening to the song of Souls. Water calms, ripples, and fades Beneath a billion stars. You dive, The water is a little cool today. — Kassidy Young