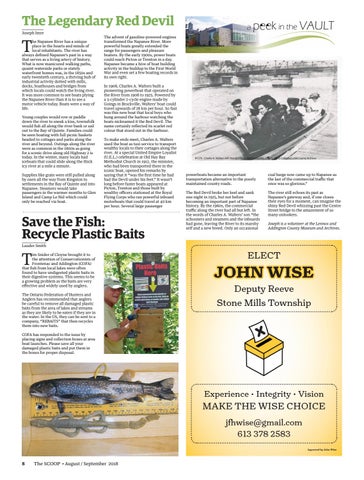 he Napanee River has a unique place in the hearts and minds of local inhabitants. The river has always defined Napanee’s past in a way that serves as a living artery of history. What is now manicured walking paths, quaint waterside parks or stately waterfront homes was, in the 1850s and early twentieth century, a thriving hub of industrial activity dotted with mills, docks, boathouses and bridges from which locals could watch the living river. It was more common to see boats plying the Napanee River than it is to see a motor vehicle today. Boats were a way of life. Young couples would row or paddle down the river to sneak a kiss, townsfolk would fish all along the river bank or sail out to the Bay of Quinte. Families could be seen boating with full picnic baskets headed to cottages and parks along the river and beyond. Outings along the river were as common in the 1800s as going for a scenic drive along old Highway 2 is today. In the winter, many locals had iceboats that could slide along the thick icy river at a mile a minute. Supplies like grain were still pulled along by oxen all the way from Kingston to settlements in the Bay of Quinte and into Napanee. Steamers would take passengers in the warmer months to Glen Island and Camp Le Nid which could only be reached via boat.

The advent of gasoline-powered engines transformed the Napanee River. More powerful boats greatly extended the range for passengers and pleasure boaters. By the early 1900s, power boats could reach Picton or Trenton in a day. Napanee became a hive of boat building activity in the buildup to the First World War and even set a few boating records in its own right. In 1908, Charles A. Walters built a pioneering powerboat that operated on the River from 1908 to 1925. Powered by a 3-cylinder 2-cycle engine made by Goings in Brockville, Walters’ boat could travel upwards of 28 km per hour. So fast was this new boat that local boys who hung around the harbour watching the boats nicknamed it the Red Devil. The name certainly reflected its scarlet red colour that stood out in the harbour. To make ends meet, Charles A. Walters used the boat as taxi service to transport wealthy locals to their cottages along the river. At a special United Empire Loyalist (U.E.L.) celebration at Old Hay Bay Methodist Church in 1912, the minister, who had been transported there in the iconic boat, opened his remarks by saying that it “was the first time he had had the Devil under his feet.” It wasn’t long before faster boats appeared at Picton, Trenton and those built by wealthy officers stationed at the Royal Flying Corps who ran powerful inboard motorboats that could travel at 40 km per hour. Several large passenger

Save the Fish: Recycle Plastic Baits

coal barge now came up to Napanee as the last of the commercial traffic that once was so glorious.”

The Red Devil broke her keel and sank one night in 1925, but not before becoming an important part of Napanee history. By the 1960s, the commercial traffic along the river had all but left. In the words of Charles A. Walters’ son “the schooners and steamers and the inboards had gone, leaving the River to its marshy self and a new breed. Only an occasional

The river still echoes its past as Napanee’s gateway and, if one closes their eyes for a moment, can imagine the shiny Red Devil whizzing past the Centre Street bridge to the amazement of so many onlookers. Joseph is a volunteer at the Lennox and Addington County Museum and Archives.

im Snider of Cloyne brought it to the attention of Conservationists of Frontenac and Addington (COFA) that fish from local lakes were often found to have undigested plastic baits in their digestive systems. This seems to be a growing problem as the baits are very effective and widely used by anglers. The Ontario Federation of Hunters and Anglers has recommended that anglers be careful to remove all damaged plastic baits from the area of lakes and streams as they are likely to be eaten if they are in the water. In the US, they can be sent to a company, “REBAITS” that then recycles them into new baits.

COFA has responded to the issue by placing signs and collection boxes at area boat launches. Please save all your damaged plastic baits and put them in the boxes for proper disposal.