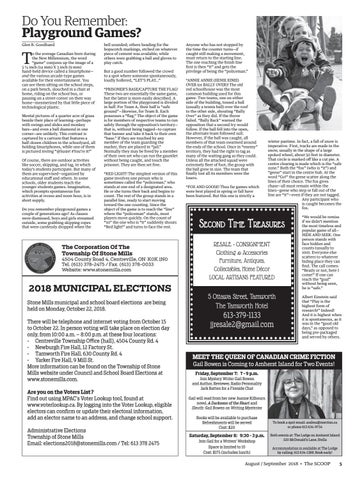 o the average Canadian born during the New Millennium, the word “game” conjures up the image of a 5 ½ inch (14 mm) X 3 inch (9 mm) hand-held device called a Smartphone— and the various arcade-type games available for their entertainment. You can see them sitting on the school steps, on a park bench, slouched in a chair at home, riding on the school bus, or pausing on a street corner on their way home—mesmerized by that little piece of technological plastic. Mental pictures of a quarter acre of grass beside their place of learning—perhaps with swings and slides and monkey bars—and even a ball diamond in one corner—are unlikely. This contrast is captured by a cartoon that features a half-dozen children in the schoolyard, all holding Smartphones, while one of them is pictured texting “@Susie! #You’re it!” Of course, there are outdoor activities like soccer, skipping, and tag, in which today’s students participate. But many of them are supervised—organized by educational staff and others. In some schools, older students teach the younger students games. Imagination, which prompts spontaneous fun activities at recess and noon hour, is in short supply. Do you remember playground games a couple of generations ago? As classes were dismissed, boys and girls streamed outside, some grabbing skipping ropes that were carelessly dropped when the

bell sounded; others heading for the hopscotch markings, etched on whatever piece of cement was available; while others were grabbing a ball and gloves to play catch. But a good number followed the crowd to a spot where someone spontaneously, loudly hollered, “LET’S PLAY…” *PRISONER’S BASE/CAPTURE THE FLAG! These two are essentially the same game, but the latter is more easily described. A large portion of the playground is divided in half. For Team A, their half is “safe ground”—likewise, for Team B. Each possesses a “flag.” The object of the game is for members of respective teams to run safely through the opposition’s territory— that is, without being tagged—to capture that banner and take it back to their own “base.” If they are touched by any member of the team guarding the marker, they are placed in “jail.” Normally they may be freed by a member of their own set who can run the gauntlet without being caught, and touch the prisoner. They are then set free. *RED LIGHT! The simplest version of this game involves one person who is sometimes called the “policeman,” who stands at one end of a designated area. He or she turns their back and begins to count. The rest of the group stands in a parallel line, ready to start moving toward the one counting. Since the object of the game is to reach the “line” where the “policeman” stands, most players move quickly. On the count of “10” the one who is “it” suddenly shouts “Red light!” and turns to face the rest.

The Corporation Of The Township Of Stone Mills

2018 MUNICIPAL ELECTIONS Stone Mills municipal and school board elections are being held on Monday, October 22, 2018. There will be telephone and internet voting from October 15 to October 22. In person voting will take place on election day only, from 10:00 a.m. – 8:00 p.m. at these four locations: • Centreville Township Office (hall), 4504 County Rd. 4 • Newburgh Fire Hall, 12 Factory St. • Tamworth Fire Hall, 630 County Rd. 4 • Yarker Fire Hall, 9 Mill St. More information can be found on the Township of Stone Mills website under Council and School Board Elections at www.stonemills.com.

Anyone who has not stopped by the time the counter turns—if caught still making a movement, must return to the starting line. The one reaching the finish line first is then “it” and gets the privilege of being the “policeman.” *ANNIE ANNIE (EENIE EINIE) OVER (or BALLY OVER)! The old red schoolhouse was the most common building used for this game. Two teams, one on either side of the building, tossed a ball (usually a tennis ball) over the roof to the other side, shouting “Bally Over” as they did. If the throw failed. “Bally Back” warned the opposition that a second try would follow. If the ball fell into the open, the alternate team followed suit. However, if the ball was caught, all members of that team swarmed around the ends of the school. Once in “enemy” territory, they had the right to tag as many of the waiting gang as they could. Unless all the attacked squad were extremely fleet of foot, the group with the ball grew in size. The team that finally lost all its members were the losers. *FOX AND GOOSE! Thus far games which were best played in spring or fall have been featured. But this one is strictly a

winter pastime. In fact, a fall of snow is imperative. First, tracks are made in the snow, usually in the shape of a large spoked wheel, about 50 feet in diameter. That circle is marked off like a cut pie. A centre clearing is made which is the “safe zone.” Both the “fox” (who is “it”) and “geese” start in the centre hub. At the word “Go!” the geese scatter along the lines of their choice. The fox gives chase—all must remain within the lines—geese who step or fall out of the line are “it”—even if they are not tagged. Any participant who is caught becomes the fox.

*We would be remiss if we didn’t mention the most timeless and popular game of all— HIDE AND SEEK. One person stands with face hidden and counts (usually to 100). Everyone else scatters to whatever hiding place they can find. The call comes: “Ready or not, here I come!” If one can reach the “goal” without being seen, he is “safe.” Albert Einstein said that “Play is the highest form of research!” Indeed! And it is highest when it is spontaneous, as it was in the “good old days,” as opposed to being pre-packaged and served by others.

Are you on the Voters List? Find out using MPAC’s Voter Lookup tool, found at www.voterlookup.ca. By logging into the Voter Lookup, eligible electors can confirm or update their electoral information, add an elector name to an address, and change school support.

Gail will read from her new Joanne Kilbourn novel, A Darkness of the Heart and Sleuth: Gail Bowen on Writing Mysteries

Books will be available to purchase Refreshments will be served Cost: $20 Join Gail for a Writers’ Workshop Space is limited to 10 Cost: $175 (includes lunch)