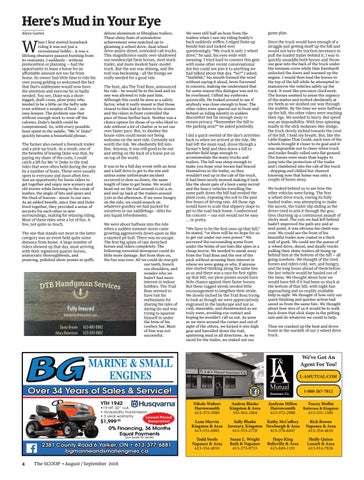 hen I first started horseback riding it was not just a recreational hobby – it was a lifelong obsessive passion bursting from its restraints. I suddenly – without premonition or planning — had the opportunity to lease a horse for an affordable amount not too far from home. Its owner had little time to ride his own young gelding so welcomed the fact that Dan’s stablemate would now have the attention and exercise he so badly needed. You see, Duke was a shortlegged, draft-cross, plow pony who tended to be a little on the hefty side even without a surplus of food – an easy-keeper. The problem was that without enough work to wear off the calories, Duke’s health could be compromised. So, with every possible hour spent in the saddle, “Me ‘n’ Duke” quickly became a household phrase. The farmer also owned a livestock trailer and a pick-up truck. As a result, one of the benefits of leasing Duke was that, by paying my share of the costs, I could catch a lift for Me ‘n’ Duke to the trail rides that were often held during the year by a number of hosts. These were usually open to everyone and most often free. Just an opportunity for horse riders to get together and enjoy new scenery and old stories while listening to the creak of leather, the jingle of bits and spurs and the thud of hooves – music to our ears. As an added benefit, since Dan and Duke lived together, they provided a sense of security for each other in new surroundings, making for relaxing riding. Most of these rides were a lot of fun. A few, not quite so much. The one that stands out most in the latter category was an event held quite some distance from home. A large number of riders showed up that day, most arriving with their registered quarter horses, aristocratic thoroughbreds, and prancing, polished show ponies in spiffy

deluxe aluminum or fibreglass trailers. These shiny feats of automotive achievement were matched up to gleaming 4-wheel drive, dual-wheel drive and/or diesel, extended-cab trucks. This magnificence easily over-shadowed our nondescript farm horses, steel stock trailer, and more modest basic-model truck. But the sun was shining, and the trail was beckoning – all the fixings we really needed for a good ride. The host, aka The Trail Boss, announced his rule – he would be in the lead and no one was allowed to ride past him. Although this could be seen as a safety factor, what it really meant is that those closest to him had to listen to his stories and the riders in front controlled the pace of those farther back. Neither was a choice option for those of us who liked to ride without a lot of chatter or to set our own faster pace. But, to disobey the house rules could mean not being welcome on the next ride. Certainly not worth the risk. We obediently fell into line. Anyway, it was still good to be out and sitting on the back of a horse put us on top of the world. It was to be a full day event with an hour and a half drive to get to the site and unless some unfortunate incident occurred to slow us down, the same length of time to get home. We would head out on the trail around 11:00 a.m. and end up back at the trailers around 3:00 in the afternoon. If we were hungry on the ride, we could munch on whatever goodies we had packed for ourselves in our saddlebags – ditto for any liquid refreshments. We were about halfway into the ride when a sudden summer storm came growling aggressively down upon us like a taunted pit bull. There was no escape. The first big splats of rain drenched horses and riders completely. The following torrential downpour could do little more damage. But from then on, the fun was over. All we could do was grit our teeth, hunch our shoulders, and wonder why we hadn’t had more interest in indoor hobbies. The Trail Boss seemed to have lost his enthusiasm for sharing his tales of daring-do and was trying to squeeze himself in under the brim of his cowboy hat. Most of him was not successful.

We were still half an hour from the trailers when I saw my riding buddy’s back suddenly stiffen. I edged Duke up beside him and looked over questioningly. “My truck is only 2-wheel drive,” he said, his eyes wide with meaning. I tried hard to connect this gem with some other recent conversational dot but could not join it to anything we had talked about that day. “So?” I asked. “Ssshhhh,” his mouth formed the word without saying it aloud, brow furrowed in concern, making me understand that for some reason this dialogue was not to be overheard. I lifted my eyebrows quizzically. He looked around to see if anybody was close enough to hear. The other riders were spaced out in front and behind us riding silently in sodden discomfort but far enough away to ensure privacy. “Remember the hill to the parking area?” he asked pointedly. I did a quick rewind of the day’s activities back to when we arrived at the ride. We had left the main road, drove through a farmer’s field and then down a hill to another field large enough to accommodate the many trucks and trailers. The hill was steep enough to make you hope your horses had braced themselves in the trailer, so they wouldn’t end up in the cab of the truck. It had been newly mowed making it look like the shorn pate of a boot-camp recruit and the heavy vehicles travelling the same path down the hill had eroded the plant roots, exposing the soil to the past few hours of driving rain. All those rigs would have to scale that slippery slope to get to the road back home. I understood his concern — our exit would not be easy … or pretty. “We have to be the first ones up that hill,” he stated, “or there will be no hope for us to get out under our own power.” We surveyed the surrounding scene from under the brims of our hats like spies in a cheap movie. We needed to sneak away from the Trail Boss and the rest of the pack without arousing their interest in where we were going or why. If anyone else started thinking along the same line as us and there was a race for first rights up that hill, our plow ponies would have little chance against their faster horses. But these rugged steeds needed little encouragement to lengthen their stride. We slowly inched by the Trail Boss trying to look as though we were appreciatively engrossed in the landscape and not as cold, miserable, and disinterested as we truly were, avoiding eye contact and hoping he wouldn’t call us out. As soon as we were around the corner and out of sight of the others, we kicked it into high gear and barrelled down the trail, spattering mud in all directions. As we raced for the trailer, we staked out our

game plan. Since the truck would have enough of a struggle just getting itself up the hill and would not have the traction necessary to pull the loaded trailer behind it, I was to quickly unsaddle both horses and throw our gear into the back of the truck under the tonneau cover while Dale Earnhardt unlocked the doors and warmed up the engine. I would then lead the horses to the top of the hill while he attempted to manoeuvre the vehicles safely up the track. It went like precision clockwork. The horses seemed to sense the urgency of the matter and trotted obediently at my heels as we sloshed our way through the stubble. By the time we were halfway up the hill, the other riders were reaching their rigs. We needed to hurry. But speed was an impossibility. With tires spinning madly in the slick molasses-like sludge, the truck slowly inched towards the crest of the hill. I held my breath. But, like the Little Engine That Could, each turn of the wheels brought it closer to its goal and it was impossible not to cheer when truck and trailer finally rolled onto flat ground. The horses were more than happy to jump into the protection of the trailer and I clambered into the cab of the truck – dripping and chilled but cheered knowing now that home was only a couple of hours away. We looked behind us to see how the other vehicles were faring. The first 4-wheel drive truck, towing its fully loaded trailer, was attempting to make the ascent, the trailer slip sliding as the driver tried to jerk it through the goo, tires churning up a continuous assault of sticky mud. The ruts we had left behind hadn’t improved the path any and at mid-point, it was obvious his climb was over. We could see the front of his beautiful trailer now coated in a thick wall of gunk. We could see the queue of 4-wheel drive, diesel, and dually trucks pulling their shiny trailers all lining up behind him at the bottom of the hill — all going nowhere. We thought of the tired horses and riders cold, wet, and hungry, and the long hours ahead of them before the last vehicle would be hauled out of the mess. We thought about how we would have felt if it had been us stuck at the bottom of that hill, with night fast approaching and no readily available help in sight. We thought of how only our quick thinking and quicker action had saved us from the same fate. We thought about how nice of us it would be to walk back down that slick slope in the pelting rain and do whatever we could to help. Then we cranked up the heat and drove home in the warmth of our 2-wheel drive truck.