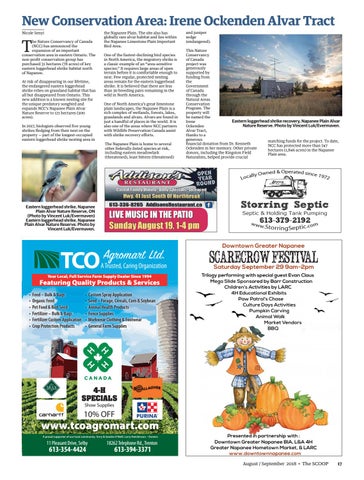 he Nature Conservancy of Canada (NCC) has announced the expansion of an important conservation area in eastern Ontario. The non-profit conservation group has purchased 31 hectares (78 acres) of key eastern loggerhead shrike habitat north of Napanee. At risk of disappearing in our lifetime, the endangered eastern loggerhead shrike relies on grassland habitat that has all but disappeared from Ontario. This new addition is a known nesting site for the unique predatory songbird and expands NCC’s Napanee Plain Alvar Nature Reserve to 121 hectares (300 acres). In 2017, biologists observed five young shrikes fledging from their nest on the property — part of the longest-occupied eastern loggerhead shrike nesting area in

the Napanee Plain. The site also has globally rare alvar habitat and lies within the Napanee Limestone Plain Important Bird Area. One of the fastest-declining bird species in North America, the migratory shrike is a classic example of an “area-sensitive species.” It requires large areas of open terrain before it is comfortable enough to nest. Few regular, protected nesting areas remain for the eastern loggerhead shrike. It is believed that there are less than 30 breeding pairs remaining in the wild in North America. One of North America’s great limestone plain landscapes, the Napanee Plain is a rich complex of wetlands, forests, lakes, grasslands and alvars. Alvars are found in just a handful of places in the world. It is also one of the areas where NCC partners with Wildlife Preservation Canada assist with shrike recovery efforts. The Napanee Plain is home to several other federally-listed species at risk, including eastern meadowlark (threatened), least bittern (threatened)

and juniper sedge (endangered). This Nature Conservancy of Canada project was generously supported by funding from the Government of Canada through the Natural Areas Conservation Program. The property will be named the Eastern loggerhead shrike recovery, Napanee Plain Alvar Irene Nature Reserve. Photo by Vincent Luk/Evermaven. Ockenden Alvar Tract, thanks to a generous matching funds for the project. To date, financial donation from Dr. Kenneth NCC has protected more than 747 Ockenden in her memory. Other private hectares (1,846 acres) in the Napanee donors, including the Kingston Field Plain area. Naturalists, helped provide crucial