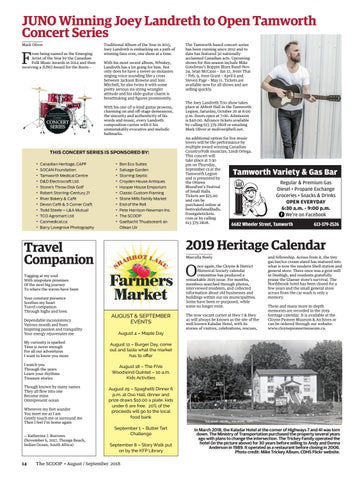 Traditional Album of the Year in 2015, Joey Landreth is embarking on a path of winning fans over, one show at a time. With his most recent album, Whiskey, Landreth has a lot going for him. Not only does he have a sweet-as-molasses singing voice sounding like a cross between Jackson Browne and Joni Mitchell, he also twins it with some pretty serious six-string wrangler attitude and his slide-guitar charm is breathtaking and figures prominently. With his one-of-a-kind guitar prowess, charming on and off-stage demeanour, the sincerity and authenticity of his words and music, every Landreth composition carries with it his unmistakably evocative and melodic hallmarks.

THIS CONCERT SERIES IS SPONSORED BY:

My curiosity is sparked Time is never enough For all our adventures I want to know you more I watch you Through the years Learn your rhythms Treasure stories Though known by many names They all flow into one Become mine Omnipresent ocean Wherever my feet wander You meet me as I am Gently touch me or surround me Then I feel I’m home again — Katherine J. Burrows (November 6, 2017, Thonga Beach, Indian Ocean, South Africa)

An additional option for live music lovers will be the performance by multiple award winning Canadian Country/Folk musician, Lindi Ortega. This concert will take place at 7:30 pm on Thursday, September 13 at the Tamworth Legion and is presented by the Ottawa BluesFest’s Festival of Small Halls. Tickets are $25.00 and can be purchased online at festivalofsmallhalls. frontgatetickets. com or by calling 613 379 2808.

nce again, the Cloyne & District Historical Society calendar committee has produced a remarkable 2019 issue. For months, members searched through photos, interviewed residents, and collected information about old businesses and buildings within our six municipalities. Some have been re-purposed, while some no longer exist.

The Tamworth based concert series has been running since 2012 and to date has featured 50 nationally acclaimed Canadian acts. Upcoming shows for this season include Mike Goudreau’s Boppin Blues Band-Nov. 24, Séan McCann – Jan 12, Jenie Thai – Feb. 9, Jenn Grant – April 6 and Steven Page – May 11. Tickets are available now for all shows and are selling quickly.

The now vacant corner at Hwy 7 & Hwy 41 will always be known as the site of the well known Kaladar Hotel, with its stories of visitors, celebrations, rescues,

and fellowship. Across from it, the tiny gas bar/ice cream stand has matured into what is now the modern Shell station and general store. There once was a grist mill in Denbigh, and residents gratefully praise the Glaeser store’s survival. The Northbrook hotel has been closed for a few years and the small general store across from the car wash is only a memory. These and many more in-depth memories are recorded in the 2019 heritage calendar. It is available at the Cloyne Pioneer Museum & Archives or can be ordered through our website: www.cloynepioneermuseum.ca.

August 11 – Burger Day, come out and taste what the market has to oﬀer August 18 – The FiVe Woodwind Quintet – 10 a.m. Kids Activities August 25 – Spaghetti Dinner 6 p.m. at Oso Hall, dinner and prize draws $10.00 a plate, kids under 6 are free. 20% of the proceeds will go to the local food bank September 1 – Butter Tart Challenge September 8 – Story Walk put on by the KFP Library

In March 2018, the Kaladar Hotel at the corner of Highways 7 and 41 was torn down. The Ministry of Transportation purchased the property several years ago with plans to change the intersection. The Trickey Family operated the hotel (in the picture above) for 30 years before selling to Andy and Donna Anderson in 1989. It operated as a restaurant before closing in 2006. Photo credit: Mike Trickey Album, CDHS Flickr website.