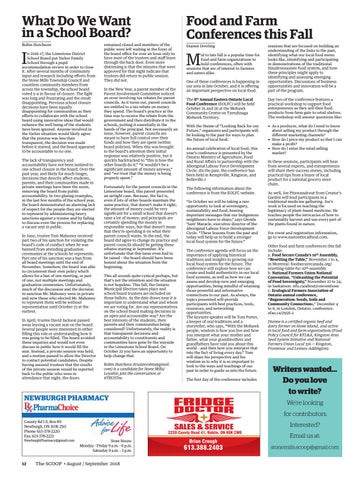 What Do We Want in a School Board? Robin Hutcheon

n 2016-17, the Limestone District School Board put Yarker Family School through a pupil accommodation review in order to close it. After several months of community input and research including efforts from the Stone Mills Township Council and countless community members from across the township, the school board voted 5-4 in favour of closure. The fight was long and frustrating and the result disappointing. Previous school closure decisions have been equally disappointing for communities as their efforts to collaborate with the school board using innovative ideas that would enhance the well being of the students have been ignored. Anyone involved in the Yarker situation would likely agree that the process was less than transparent, the decision was made before it started, and the board appeared to be accountable to no one. The lack of transparency and accountability have not been isolated to one school closure in the board. Over the past year, and likely for much longer, decisions that directly affect students, parents, and their communities made in private meetings have been the norm, removing the board from public accountability. In two glaring examples, in the last few months of the school year, the board demonstrated an alarming lack of respect for the people they are elected to represent by administering heavy sanctions against a trustee and by failing to discuss even the process for replacing a vacant seat in public. In June, trustee Tom Mahoney received part two of his sanction for violating the board’s code of conduct when he was banned from attending graduation ceremonies at the schools he represents. Part one of his sanction was a ban from all board meetings until the end of November. Somehow, the board was able to circumvent their own policy which allows for a ban of one meeting, or part of one, not multiple meetings and graduation ceremonies. Unfortunately, much of the discussion and the decision to sanction Mr. Mahoney were in private and now those who elected Mr. Mahoney to represent them will be without representation until October 22 at the earliest. In April, trustee David Jackson passed away leaving a vacant seat on the board. Several people were interested in either filling this role or understanding how it was going to be filled. The board avoided these inquiries and would not even discuss in public how it would fill the seat. Instead, a private session was held, and a motion passed to allow the Director to contact potential candidates. Despite having assured trustees that the results of the private session would be reported back to the public who were in attendance that night, the doors

remained closed and members of the public were left waiting in the foyer of the board office for over an hour only to have most of the trustees and staff leave through the back door. Even more distressing is that the minutes that were approved for that night indicate that trustees did return to public session. They did not. In the New Year, a parent member of the Parent Involvement Committee noticed an error involving tax rebates for parent councils. As it turns out, parent councils are entitled to a tax rebate on money they spend. The board’s practice at the time was to receive the rebate from the government and then distribute it to the schools, putting it essentially in the hands of the principal. Not necessarily an issue, however, parent councils are meant to have full control over their funds and how they are spent (within board policies). When this was brought to the board’s attention their initial response was relatively positive, but it quickly backtracked to “this is how the other boards do it,” “it wouldn’t be a significant amount of money anyway,” and “we trust that the money is being properly spent.” Fortunately for the parent councils in the Limestone board, this parent presented an airtight case. Because, the fact is, even if lots of other boards maintain the same practice, that doesn’t make it right; the amount of money could be very significant for a small school that doesn’t raise a lot of money; and principals are certainly spending the money in responsible ways, but that doesn’t mean that they’re spending it on what their parent council wants. In the end, the board did agree to change its practice and parent councils should be getting these rebates starting in September. It’s unfortunate that this issue even had to be raised – the board should have been honest about the situation from the beginning. This all sounds quite cynical perhaps, but that’s not the intention and the situation is not hopeless. This fall, the Ontario Municipal Election takes place and school board trustees are included on those ballots. As the date draws near it is important to understand what and whom we are voting for. Are our representatives on the school board making decisions in an open and accountable way? Are the best interests of the students, their parents and their communities being considered? Unfortunately, the reality is that transparent decisions and accountability to constituents and communities have gone by the wayside in the Limestone School Board. On October 22 you have an opportunity to help change that. Robin Hutcheon (trusteerobin@gmail. com) is a candidate for Stone Mills/ Loyalist; join the conversation at #TRUSTee.

Food and Farm Conferences this Fall

One of these conferences is happening in our area in late October, and it is offering an important perspective on local food.

sessions that are focused on building an understanding of the links to the past, identifying what our local food menu looks like, identifying and participating in demonstrations of the traditional Haudenosaunee food system, and how these principles might apply to identifying and assessing emerging opportunities. Discussions of business opportunities and innovation will be a part of the program.

The 8th Annual Eastern Ontario Local Food Conference (EOLFC) will be held October 25 and 26 at the Mohawk Community Centre on Tyendinaga Mohawk Territory.

Day two of the conference features a practical workshop to support food entrepreneurs as they sell their food products from farm gate to retail shelves. The workshop will answer questions like:

With the theme of “Looking Back for our Future,” organizers and participants will be looking to the past for ways to plan the future of local food.

• As a producer, what do I need to know

id to late fall is a popular time for food and farm organizations to hold conferences, often with sessions that are of interest to farmers and eaters alike.

An annual celebration of local food, this year’s conference is presented by the Ontario Ministry of Agriculture, Food and Rural Affairs in partnership with the Aboriginal Labour Force Development Circle. (In the past, the conference has been held in Kemptville, Kingston, and Belleville.) The following information about the conference is from the EOLFC website. “In October we will be taking a rare opportunity to look at sovereignty, sustainability and food, hearing important messages that our Indigenous neighbours have to share,” says Glenda ‘Sam’ Maracle, executive director of the Aboriginal Labour Force Development Circle. “These lessons from the past and today will help us to build a stronger local food system for the future.” The conference agenda will focus on the importance of applying historical traditions and insights to growing our local food system for the future. The conference will explore how we can create and build authenticity in our local food systems, as well as how we can assess and develop new and emerging opportunities, being mindful of retaining those powerful and informative connections to our past. As always, the topics presented will provide participants with best practices, tools, resources, and networking opportunities. The keynote speaker will be Tom Porter, a keeper of oral traditions and a storyteller, who says, “With the Mohawk people, wisdom is how you live and how you interpret what your mother and father, what your grandmothers and grandfathers have told you about this world – and then how you interpret that into the fact of living every day.” Tom will share his perspective and his wisdom as to why it is so important to look to the ways and teachings of our past in order to guide us into the future. The first day of the conference includes

about selling my product through the different marketing channels? • How do I price my product so that I can make a profit? • How do I enter the retail selling market? In these sessions, participants will hear from several experts, and entrepreneurs will share their success stories, including practical tips from a buyer of local product for a national grocery store chain. As well, Joe Pitawanakwat from Creator’s Garden will lead participants in a traditional medicine gathering. Joe’s work is focused on teaching the legitimacy of plant-based medicine. He teaches people the intricacies of how to sustainably harvest and use every part of the plants found in nature. For event and registration information, go to www.eastontlocalfood.com. Other food and farm conferences this fall include: a. Food Secure Canada’s 10th Assembly, “Resetting the Table,” November 1 to 4, in Montreal. foodsecurecanada.org/ resetting-table-fsc-10th-assembly b. National Farmers Union National Convention, “Unleashing the Potential of Food Sovereignty,” November 22 to 24, in Saskatoon. nfu.ca/about/conventions c. Ecological Farmers Association of Ontario annual conference, “Regeneration: Seeds, Soils and Community Connections,” December 4 to 6, in London, Ontario. conference. efao.ca/2956-2 Dianne is a certified organic beef and dairy farmer on Howe Island, and active in local food and farm organizations (Food Policy Council for KFL&A, Kingston Area Seed System Initiative and National Farmers Union Local 316 — Kingston, Frontenac and Lennox-Addington).

Writers wanted... Do you love to write? We’re looking for contributors.