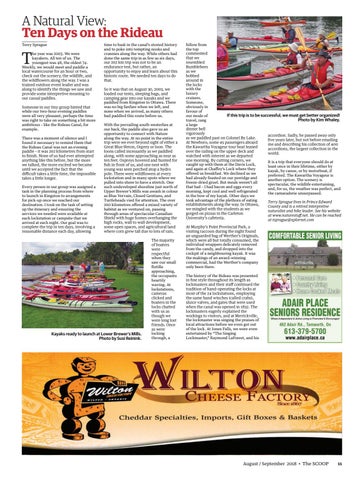 A Natural View: Ten Days on the Rideau Terry Sprague he year was 2003. We were kayakers. All ten of us. The youngest was 48, the oldest 74. Weekly, we would meet and paddle a local watercourse for an hour or two, check out the scenery, the wildlife, and the wildflowers along the way. I was a trained outdoor event leader and was along to identify the things we saw and provide some interpretive meaning to our casual paddles.

Someone in our tiny group hinted that while our two-hour evening paddles were all very pleasant, perhaps the time was right to take on something a bit more ambitious – like the Rideau Canal, for example. There was a moment of silence and I found it necessary to remind them that the Rideau Canal was not an evening paddle – it was 202 kilometres from start to finish. None of us had ever attempted anything like this before, but the more we talked, the more excited we became until we accepted the fact that the difficult takes a little time, the impossible takes a little longer. Every person in our group was assigned a task in the planning process from where to launch in Kingston to arrangements for pick-up once we reached our destination. I took on the task of setting up the itinerary and ensuring the services we needed were available at each lockstation or campsite that we arrived at each night. Our goal was to complete the trip in ten days, involving a reasonable distance each day, allowing

time to bask in the canal’s storied history and to poke into tempting nooks and crannies along the way. While others had done the same trip in as few as six days, our 202 km trip was not to be an endurance test, but rather, an opportunity to enjoy and learn about this historic route. We needed ten days to do that. So it was that on August 30, 2003, we loaded our tents, sleeping bags, and camping gear into our kayaks and we paddled from Kingston to Ottawa. There was no big fanfare when we left, and none when we arrived, as many others had paddled this route before us. With the prevailing south westerlies at our back, the paddle also gave us an opportunity to connect with Nature along the way. At no point in the entire trip were we ever beyond sight of either a Great Blue Heron, Osprey or loon. The loons called incessantly as we paddled along, with some approaching as near as ten feet. Ospreys hovered and hunted for fish in front of us, and one nest with young was seen perched atop a hydro pole. There were wildflowers at every lockstation and in many spots where we pulled into shore to have a stretch. One such undeveloped shoreline just north of Upper Brewer’s Mills was awash in colour as Blue Vervain, Closed Gentians, and Turtleheads vied for attention. The over 200 kilometres offered a mixed variety of habitat as we ventured on, passing through areas of spectacular Canadian Shield with huge homes overhanging the high rocks, wall to wall development, some open spaces, and agricultural land where corn grew tall due to lots of rain.

The majority of boaters were respectful when they saw our small flotilla approaching, the occupants heartily waving. At lockstations, cameras clicked and boaters in the locks chatted with us as though we were long lost friends. Once as were locking through, a

fellow from the top commented that we resembled Bumblebees as we bobbed around in the locks with the luxury cruisers. Someone, obviously in favour of If this trip is to be successful, we must get better organized! our mode of Photo by Kim Whaley. travel, rang a large dinner bell vigorously accordion. Sadly, he passed away only as we paddled past on Colonel By Lake. five years later, but not before emailing At Newboro, some 45 passengers aboard me and describing his collection of 400 the Kawartha Voyageur tour boat leaned accordions, the largest collection in the over the railing on the upper deck and world. watched with interest as we departed one morning. By cutting corners, we It is a trip that everyone should do at caught up with them at the Davis Lock, least once in their lifetime, either by and again at Chaffey’s Lock where they kayak, by canoe, or by motorboat, if offered us breakfast. We declined as we preferred. The Kawartha Voyageur is had already feasted on our porridge and another option. The scenery is freeze-dried gruel. But meals weren’t all spectacular, the wildlife entertaining, that bad – I had bacon and eggs every and, for us, the weather was perfect, and morning, kept cool and well refrigerated the camaraderie unsurpassed. in the bow of my kayak. Other days we took advantage of the plethora of eating Terry Sprague lives in Prince Edward establishments along the way. In Ottawa, County and is a retired interpretive we mingled with the students as we naturalist and hike leader. See his website gorged on pizzas in the Carleton at www.naturestuff.net. He can be reached University’s cafeteria. at tsprague@xplornet.com At Murphy’s Point Provincial Park, a visiting raccoon during the night found an unguarded bag of Werther’s Originals, which were all but totally consumed, the individual wrappers delicately removed from the candy, and dropped into the cockpit of a neighbouring kayak. It was the makings of an award-winning commercial, had the Werther’s company only been there. The history of the Rideau was presented in fine style throughout its length as lockmasters and their staff continued the tradition of hand-operating the locks at most of the 24 lockstations, employing the same hand winches (called crabs), sluice valves, and gates that were used when the canal was opened in 1832. The lockmasters eagerly explained the workings to visitors, and at Merrickville, the lockmaster was singing the praises of local attractions before we even got out of the lock. At Jones Falls, we were even entertained by “The Singing Lockmaster,” Raymond LaForest, and his