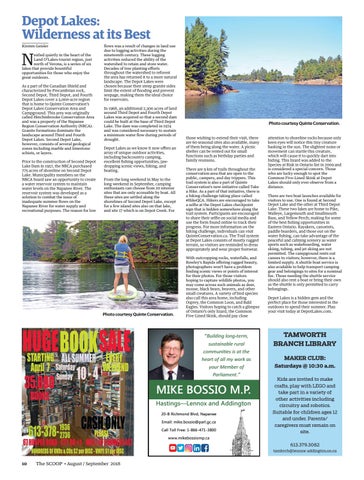 estled quietly in the heart of the Land O’Lakes tourist region, just north of Verona, is a series of six lakes that provide bountiful opportunities for those who enjoy the great outdoors. As a part of the Canadian Shield and characterized by Precambrian rock, Second Depot, Third Depot, and Fourth Depot Lakes cover a 3,000-acre region that is home to Quinte Conservation’s Depot Lakes Conservation Area and Campground. This area was originally called Hinchinbrooke Conservation Area and was a property of the Napanee Region Conservation Authority (NRCA). Granite formations dominate the landscape around Third and Fourth Depot Lakes. Second Depot Lake, however, consists of several geological zones including marble and limestone schists, or layers. Prior to the construction of Second Depot Lake Dam in 1957, the NRCA purchased 775 acres of shoreline on Second Depot Lake. Municipality members on the NRCA board saw an opportunity to create a water reservoir system to maintain water levels on the Napanee River. The reservoir system was developed as a solution to combat the issue of inadequate summer flows on the Napanee River for water supply and recreational purposes. The reason for low

flows was a result of changes in land use due to logging activities during the nineteenth century. These logging activities reduced the ability of the watershed to retain and store water. Decades of tree planting efforts throughout the watershed to reforest the area has returned it to a more natural landscape. The Depot Lakes were chosen because their steep granite sides limit the extent of flooding and prevent seepage, making them the ideal choice for reservoirs. In 1968, an additional 2,300 acres of land around Third Depot and Fourth Depot Lakes was acquired so that a second dam could be built at the base of Third Depot Lake. The dam was completed in 1974 and was considered necessary to sustain a minimum water flow during periods of drought. Depot Lakes as we know it now offers an array of unique outdoor activities, including backcountry camping, excellent fishing opportunities, jawdropping scenic views, hiking, and boating. From the long weekend in May to the long weekend in September, camping enthusiasts can choose from 20 interior sites that are only accessible by boat. All these sites are settled along the shorelines of Second Depot Lake, except for a few island sites also on that lake, and site 17 which is on Depot Creek. For

Photo courtesy Quinte Conservation. those wishing to extend their visit, there are 60 seasonal sites also available, many of them being along the water. A picnic shelter can be rented out for small functions such as birthday parties and family reunions. There are 9 km of trails throughout the conservation area that are open to the public, campers, and day trippers. This trail system is also a part of Quinte Conservation’s new initiative called Take a Hike. As a part of that initiative, there is a hiking challenge taking place called #HikeQCA. Hikers are encouraged to take a selfie at the Depot Lakes checkpoint sign that is hidden somewhere along the trail system. Participants are encouraged to share their selfie on social media and use the form found online to track their progress. For more information on the hiking challenge, individuals can visit QuinteConservation.ca. The Trail system at Depot Lakes consists of mostly rugged terrain, so visitors are reminded to dress appropriately and wear proper footwear. With outcropping rocks, waterfalls, and Rowley’s Rapids offering rugged beauty, photographers won’t have a problem finding scenic views or points of interest for their photos. For those visitors hoping to capture wildlife photos, you may come across such animals as deer, moose, black bears, beavers, and other small creatures. A variety of bird species also call this area home, including Osprey, the Common Loon, and Bald Eagles. Visitors hoping to catch a glimpse of Ontario’s only lizard, the Common Five-Lined Skink, should pay close

attention to shoreline rocks because only keen eyes will notice this tiny creature basking in the sun. The slightest noise or movement can startle this creature, which will cause it to quickly dart into hiding. This lizard was added to the Species at Risk in Ontario list in 2009 and is considered a special concern. Those who are lucky enough to spot the Common Five-Lined Skink at Depot Lakes should only ever observe from a distance. There are two boat launches available for visitors to use. One is found at Second Depot Lake and the other at Third Depot Lake. These two lakes are home to Pike, Walleye, Largemouth and Smallmouth Bass, and Yellow Perch; making for some of the best fishing opportunities in Eastern Ontario. Kayakers, canoeists, paddle boarders, and those out on the water fishing, can take advantage of the peaceful and calming scenery as water sports such as wakeboarding, water skiing, tubing, and jet skiing are not permitted. The campground rents out canoes to visitors; however, there is a limited supply. A shuttle boat service is also available to help transport camping gear and belongings to sites for a nominal fee. Those needing the shuttle service should also rent a boat or bring their own as the shuttle is only permitted to carry belongings. Depot Lakes is a hidden gem and the perfect place for those interested in the outdoors to spend their summer. Plan your visit today at DepotLakes.com.

TAMWORTH BRANCH LIBRARY MAKER CLUB: Saturdays @ 10:30 a.m. Kids are invited to make crafts, play with LEGO and take part in a variety of other activities including circuitry and robotics. Suitable for children ages 12 and under. Parents/ caregivers must remain on site.