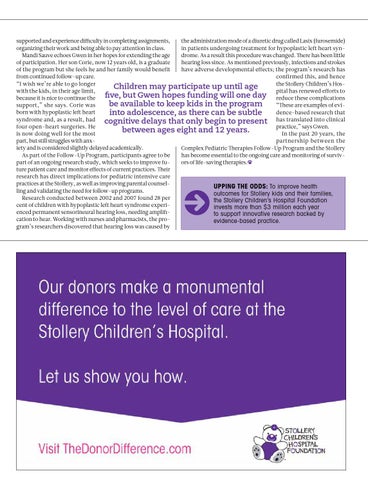 supported and experience difficulty in completing assignments, the administration mode of a diuretic drug called Lasix (furosemide) organizing their work and being able to pay attention in class. in patients undergoing treatment for hypoplastic left heart synMandi Sauve echoes Gwen in her hopes for extending the age drome. As a result this procedure was changed. There has been little of participation. Her son Corie, now 12 years old, is a graduate hearing loss since. As mentioned previously, infections and strokes of the program but she feels he and her family would benefit have adverse developmental effects; the program’s research has from continued follow-up care. confirmed this, and hence “I wish we’re able to go longer the Stollery Children’s HosChildren may participate up until age with the kids, in their age limit, pital has renewed efforts to five, but Gwen hopes funding will one day reduce these complications because it is nice to continue the be available to keep kids in the program support,” she says. Corie was “These are examples of eviborn with hypoplastic left heart dence-based research that into adolescence, as there can be subtle syndrome and, as a result, had cognitive delays that only begin to present has translated into clinical four open-heart surgeries. He practice,” says Gwen. between ages eight and 12 years. is now doing well for the most In the past 20 years, the part, but still struggles with anxpartnership between the iety and is considered slightly delayed academically. Complex Pediatric Therapies Follow-Up Program and the Stollery As part of the Follow-Up Program, participants agree to be has become essential to the ongoing care and monitoring of survivpart of an ongoing research study, which seeks to improve fuors of life-saving therapies. ture patient care and monitor effects of current practices. Their research has direct implications for pediatric intensive care practices at the Stollery, as well as improving parental counselUPPING THE ODDS: To improve health ling and validating the need for follow-up programs. outcomes for Stollery kids and their families, Research conducted between 2002 and 2007 found 28 per the Stollery Children’s Hospital Foundation cent of children with hypoplastic left heart syndrome experiinvests more than $3 million each year enced permanent sensorineural hearing loss, needing amplifito support innovative research backed by cation to hear. Working with nurses and pharmacists, the proevidence-based practice. gram’s researchers discovered that hearing loss was caused by