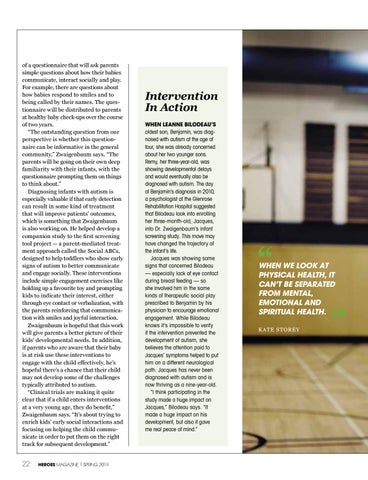 of a questionnaire that will ask parents simple questions about how their babies communicate, interact socially and play. For example, there are questions about how babies respond to smiles and to being called by their names. The questionnaire will be distributed to parents at healthy baby check-ups over the course of two years. “The outstanding question from our perspective is whether this questionnaire can be informative in the general community,” Zwaigenbaum says. “The parents will be going on their own deep familiarity with their infants, with the questionnaire prompting them on things to think about.” Diagnosing infants with autism is especially valuable if that early detection can result in some kind of treatment that will improve patients’ outcomes, which is something that Zwaigenbaum is also working on. He helped develop a companion study to the first screening tool project — a parent-mediated treatment approach called the Social ABCs, designed to help toddlers who show early signs of autism to better communicate and engage socially. These interventions include simple engagement exercises like holding up a favourite toy and prompting kids to indicate their interest, either through eye contact or verbalization, with the parents reinforcing that communication with smiles and joyful interaction. Zwaigenbaum is hopeful that this work will give parents a better picture of their kids’ developmental needs. In addition, if parents who are aware that their baby is at risk use these interventions to engage with the child effectively, he’s hopeful there’s a chance that their child may not develop some of the challenges typically attributed to autism. “Clinical trials are making it quite clear that if a child enters interventions at a very young age, they do benefit,” Zwaigenbaum says. “It’s about trying to enrich kids’ early social interactions and focusing on helping the child communicate in order to put them on the right track for subsequent development.”

Intervention In Action WHEN LEANNE BILODEAU’S oldest son, Benjamin, was diagnosed with autism at the age of four, she was already concerned about her two younger sons. Remy, her three-year-old, was showing developmental delays and would eventually also be diagnosed with autism. The day of Benjamin’s diagnosis in 2010, a psychologist at the Glenrose Rehabilitation Hospital suggested that Bilodeau look into enrolling her three-month-old, Jacques, into Dr. Zwaigenbaum’s infant screening study. This move may have changed the trajectory of the infant’s life. Jacques was showing some signs that concerned Bilodeau — especially lack of eye contact during breast feeding — so she involved him in the same kinds of therapeutic social play prescribed to Benjamin by his physician to encourage emotional engagement. While Bilodeau knows it’s impossible to verify if the intervention prevented the development of autism, she believes the attention paid to Jacques’ symptoms helped to put him on a different neurological path. Jacques has never been diagnosed with autism and is now thriving as a nine-year-old. “I think participating in the study made a huge impact on Jacques,” Bilodeau says. “It made a huge impact on his development, but also it gave me real peace of mind.”

WHEN WE LOOK AT PHYSICAL HEALTH, IT CAN’T BE SEPARATED FROM MENTAL, EMOTIONAL AND SPIRITUAL HEALTH. KATE STOREY