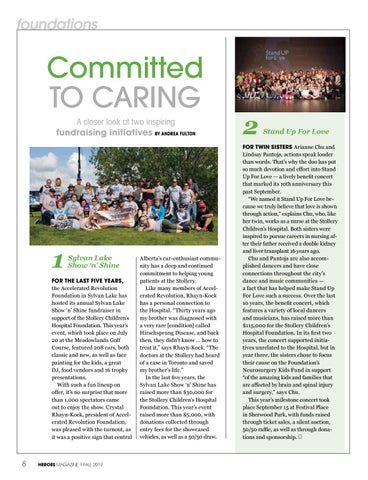 Sylvan Lake Show ‘n’ Shine FOR THE LAST FIVE YEARS, the Accelerated Revolution Foundation in Sylvan Lake has hosted its annual Sylvan Lake Show ‘n’ Shine fundraiser in support of the Stollery Children’s Hospital Foundation. This year’s event, which took place on July 20 at the Meadowlands Golf Course, featured 208 cars, both classic and new, as well as face painting for the kids, a great DJ, food vendors and 16 trophy presentations. With such a fun lineup on offer, it’s no surprise that more than 1,000 spectators came out to enjoy the show. Crystal Rhayn-Kock, president of Accelerated Revolution Foundation, was pleased with the turnout, as it was a positive sign that central

Alberta’s car-enthusiast community has a deep and continued commitment to helping young patients at the Stollery. Like many members of Accelerated Revolution, Rhayn-Kock has a personal connection to the Hospital. “Thirty years ago my brother was diagnosed with a very rare [condition] called Hirschsprung Disease, and back then, they didn’t know … how to treat it,” says Rhayn-Kock. “The doctors at the Stollery had heard of a case in Toronto and saved my brother’s life.” In the last five years, the Sylvan Lake Show ‘n’ Shine has raised more than $30,000 for the Stollery Children’s Hospital Foundation. This year’s event raised more than $5,000, with donations collected through entry fees for the showcased vehicles, as well as a 50/50 draw.

Stand Up For Love FOR TWIN SISTERS Arianne Chu and Lindsay Pantoja, actions speak louder than words. That’s why the duo has put so much devotion and effort into Stand Up For Love — a lively benefit concert that marked its 10th anniversary this past September. “We named it Stand Up For Love because we truly believe that love is shown through action,” explains Chu, who, like her twin, works as a nurse at the Stollery Children’s Hospital. Both sisters were inspired to pursue careers in nursing after their father received a double kidney and liver transplant 16 years ago. Chu and Pantoja are also accomplished dancers and have close connections throughout the city’s dance and music communities — a fact that has helped make Stand Up For Love such a success. Over the last 10 years, the benefit concert, which features a variety of local dancers and musicians, has raised more than $115,000 for the Stollery Children’s Hospital Foundation. In its first two years, the concert supported initiatives unrelated to the Hospital, but in year three, the sisters chose to focus their cause on the Foundation’s Neurosurgery Kids Fund in support “of the amazing kids and families that are affected by brain and spinal injury and surgery,” says Chu. This year’s milestone concert took place September 15 at Festival Place in Sherwood Park, with funds raised through ticket sales, a silent auction, 50/50 raffle, as well as through donations and sponsorship.