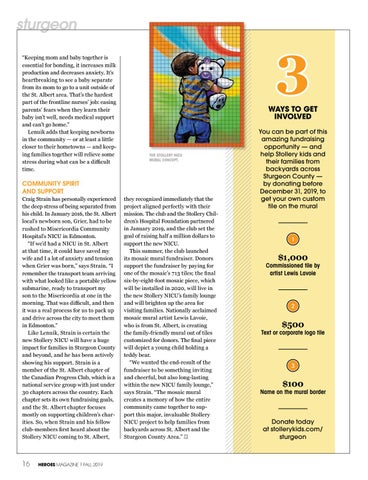 sturgeon “Keeping mom and baby together is essential for bonding, it increases milk production and decreases anxiety. It’s heartbreaking to see a baby separate from its mom to go to a unit outside of the St. Albert area. That’s the hardest part of the frontline nurses’ job: easing parents’ fears when they learn their baby isn’t well, needs medical support and can’t go home.” Lenuik adds that keeping newborns in the community — or at least a little closer to their hometowns — and keeping families together will relieve some stress during what can be a difficult time.

COMMUNITY SPIRIT AND SUPPORT Craig Strain has personally experienced the deep stress of being separated from his child. In January 2016, the St. Albert local’s newborn son, Grier, had to be rushed to Misericordia Community Hospital’s NICU in Edmonton. “If we’d had a NICU in St. Albert at that time, it could have saved my wife and I a lot of anxiety and tension when Grier was born,” says Strain. “I remember the transport team arriving with what looked like a portable yellow submarine, ready to transport my son to the Misericordia at one in the morning. That was difficult, and then it was a real process for us to pack up and drive across the city to meet them in Edmonton.” Like Lenuik, Strain is certain the new Stollery NICU will have a huge impact for families in Sturgeon County and beyond, and he has been actively showing his support. Strain is a member of the St. Albert chapter of the Canadian Progress Club, which is a national service group with just under 30 chapters across the country. Each chapter sets its own fundraising goals, and the St. Albert chapter focuses mostly on supporting children’s charities. So, when Strain and his fellow club-members first heard about the Stollery NICU coming to St. Albert,

WAYS TO GET INVOLVED

they recognized immediately that the project aligned perfectly with their mission. The club and the Stollery Children’s Hospital Foundation partnered in January 2019, and the club set the goal of raising half a million dollars to support the new NICU. This summer, the club launched its mosaic mural fundraiser. Donors support the fundraiser by paying for one of the mosaic’s 713 tiles; the final six-by-eight-foot mosaic piece, which will be installed in 2020, will live in the new Stollery NICU’s family lounge and will brighten up the area for visiting families. Nationally acclaimed mosaic mural artist Lewis Lavoie, who is from St. Albert, is creating the family-friendly mural out of tiles customized for donors. The final piece will depict a young child holding a teddy bear. “We wanted the end-result of the fundraiser to be something inviting and cheerful, but also long-lasting within the new NICU family lounge,” says Strain. “The mosaic mural creates a memory of how the entire community came together to support this major, invaluable Stollery NICU project to help families from backyards across St. Albert and the Sturgeon County Area.”

You can be part of this amazing fundraising opportunity — and help Stollery kids and their families from backyards across Sturgeon County — by donating before December 31, 2019, to get your own custom tile on the mural

Name on the mural border