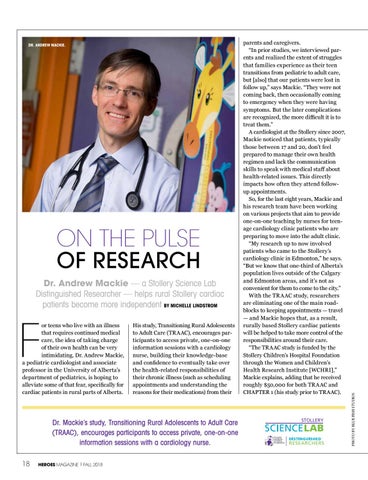 ON THE PULSE OF RESEARCH

or teens who live with an illness that requires continued medical care, the idea of taking charge of their own health can be very intimidating. Dr. Andrew Mackie, a pediatric cardiologist and associate professor in the University of Alberta’s department of pediatrics, is hoping to alleviate some of that fear, specifically for cardiac patients in rural parts of Alberta.

His study, Transitioning Rural Adolescents to Adult Care (TRAAC), encourages participants to access private, one-on-one information sessions with a cardiology nurse, building their knowledge-base and confidence to eventually take over the health-related responsibilities of their chronic illness (such as scheduling appointments and understanding the reasons for their medications) from their

parents and caregivers. “In prior studies, we interviewed parents and realized the extent of struggles that families experience as their teen transitions from pediatric to adult care, but [also] that our patients were lost in follow up,” says Mackie. “They were not coming back, then occasionally coming to emergency when they were having symptoms. But the later complications are recognized, the more difficult it is to treat them.” A cardiologist at the Stollery since 2007, Mackie noticed that patients, typically those between 17 and 20, don’t feel prepared to manage their own health regimen and lack the communication skills to speak with medical staff about health-related issues. This directly impacts how often they attend followup appointments. So, for the last eight years, Mackie and his research team have been working on various projects that aim to provide one-on-one teaching by nurses for teenage cardiology clinic patients who are preparing to move into the adult clinic. “My research up to now involved patients who came to the Stollery’s cardiology clinic in Edmonton,” he says. “But we know that one-third of Alberta’s population lives outside of the Calgary and Edmonton areas, and it’s not as convenient for them to come to the city.” With the TRAAC study, researchers are eliminating one of the main roadblocks to keeping appointments — travel — and Mackie hopes that, as a result, rurally based Stollery cardiac patients will be helped to take more control of the responsibilities around their care. “The TRAAC study is funded by the Stollery Children’s Hospital Foundation through the Women and Children’s Health Research Institute [WCHRI],” Mackie explains, adding that he received roughly $50,000 for both TRAAC and CHAPTER 1 (his study prior to TRAAC).