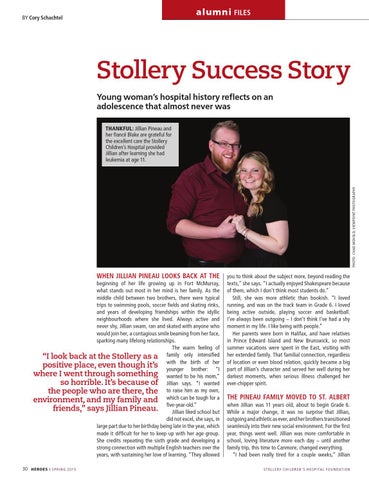 THANKFUL: Jillian Pineau and her fiancé Blake are grateful for the excellent care the Stollery Children’s Hospital provided Jillian after learning she had leukemia at age 11.

WHEN JILLIAN PINEAU LOOKS BACK AT THE beginning of her life growing up in Fort McMurray, what stands out most in her mind is her family. As the middle child between two brothers, there were typical trips to swimming pools, soccer fields and skating rinks, and years of developing friendships within the idyllic neighbourhoods where she lived. Always active and never shy, Jillian swam, ran and skated with anyone who would join her, a contagious smile beaming from her face, sparking many lifelong relationships. The warm feeling of “I look back at the Stollery as a family only intensified the birth of her positive place, even though it’s with younger brother: “I where I went through something wanted to be his mom,” so horrible. It’s because of Jillian says. “I wanted the people who are there, the to raise him as my own, environment, and my family and which can be tough for a five-year-old.” friends,” says Jillian Pineau. Jillian liked school but did not excel, she says, in large part due to her birthday being late in the year, which made it difficult for her to keep up with her age group. She credits repeating the sixth grade and developing a strong connection with multiple English teachers over the years, with sustaining her love of learning. “They allowed 30

you to think about the subject more, beyond reading the texts,” she says. “I actually enjoyed Shakespeare because of them, which I don’t think most students do.” Still, she was more athletic than bookish. “I loved running, and was on the track team in Grade 6. I loved being active outside, playing soccer and basketball. I’ve always been outgoing – I don’t think I’ve had a shy moment in my life. I like being with people.” Her parents were born in Halifax, and have relatives in Prince Edward Island and New Brunswick, so most summer vacations were spent in the East, visiting with her extended family. That familial connection, regardless of location or even blood relation, quickly became a big part of Jillian’s character and served her well during her darkest moments, when serious illness challenged her ever-chipper spirit.

THE PINEAU FAMILY MOVED TO ST. ALBERT when Jillian was 11 years old, about to begin Grade 6. While a major change, it was no surprise that Jillian, outgoing and athletic as ever, and her brothers transitioned seamlessly into their new social environment. For the first year, things went well. Jillian was more comfortable in school, loving literature more each day – until another family trip, this time to Canmore, changed everything. “I had been really tired for a couple weeks,” Jillian S TO L L E RY C H I L D R E N ’ S H O S P I TA L F O U N DAT I O N