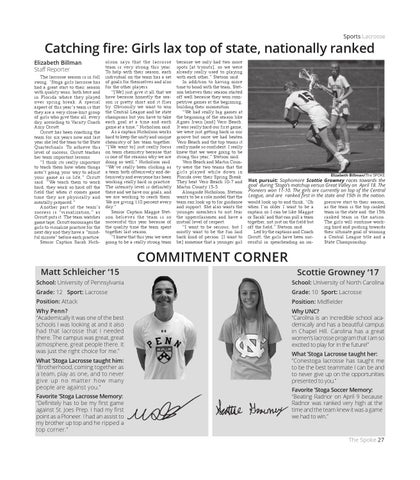 The lacrosse season is in full swing. ’Stoga girls lacrosse has had a great start to their season with quality wins, both here and in Florida where they played over spring break. A special aspect of this year’s team is that they are a very close-knit group of girls who give their all, every day, according to Varsity Coach Amy Orcutt. Orcutt has been coaching the team for six years now and last year she led the team to the State Quarterfinals. To achieve this level of success, Orcutt teaches her team important lessons. “I think its really important to teach them how when things aren’t going your way to adjust your game as in life,” Orcutt said. “We teach them to work hard, they work so hard off the field that when it comes game time they are physically and mentally prepared.” Another part of the team’s success is “visualization,” as Orcutt puts it. The team watches game tape, Orcutt encourages the girls to visualize practice for the next day and they have a “mindful minute” before each practice. Senior Captain Sarah Nich-

olson says that the lacrosse team is very strong this year. To help with their season, each individual on the team has a set of goals for themselves and also for the other players. “[We] just give it all that we have because honestly the season is pretty short and it flies by. Obviously we want to win the Central League and be state champions but you have to take each goal at a time and each game at a time,” Nicholson said. As a captain Nicholson works hard to keep the unity and unique chemistry of her team together. “[We want to] just really focus on team chemistry because that is one of the reasons why we are doing so well,” Nicholson said. “We’ve really been clicking as a team both offensively and defensively and everyone has been working really hard in practice. The intensity level is definitely there and we have our goals, and we are working to reach them. We are giving 110 percent every day.” Senior Captain Maggie Stetson believes the team is so successful this year because of the quality time the team spent together last season. “I knew that this year we were going to be a really strong team

because we only had two more spots [at tryouts], so we were already really used to playing with each other,” Stetson said. In addition to having more time to bond with the team, Stetson believes their season started off well because they won competitive games at the beginning, building their momentum. “We had really big games at the beginning of the season like Agnes Irwin [and] Vero Beach. It was really hard our first game, we were just getting back in our groove but once we had beaten Vero Beach and the top teams it really made us confident. I really knew that we were going to be strong this year,” Stetson said. Vero Beach and Martin County were the two teams that the girls played while down in Florida over their Spring Break. They beat Vero Beach 10-7 and Martin County 15-5. Alongside Nicholson, Stetson wants to be a role model that the team can look up to for guidance and support. She also wants the younger members to not fear the upperclassmen and have a mutual level of respect. “I want to be serious, but I mostly want to be the fun laid back kind of person. [I want to be] someone that a younger girl

Hot pursuit: Sophomore Scottie Growney races towards the goal during ’Stoga’s matchup versus Great Valley on April 18. The Pioneers won 11-10. The girls are currently on top of the Central would look up to and think, ‘Oh when I’m older I want to be a captain so I can be like Maggie or Sarah’ and that can pull a team together, not just on the field but off the field,” Stetson said. Led by the captains and Coach Orcutt, the girls have been successful in spearheading an im-

pressive start to their season, as the team is the top ranked team in the state and the 15th ranked team in the nation. The girls will continue working hard and pushing towards their ultimate goal of winning a Central League title and a State Championship.

Attack “Academically it was one of the best schools I was looking at and it also had that lacrosse that I needed there. The campus was great, great atmosphere, great people there. It was just the right choice for me.” “Brotherhood, coming together as a team, play as one, and to never give up no matter how many people are against you.”

point as a Pioneer. I had an assist to my brother up top and he ripped a top corner.”

“Carolina is an incredible school academically and has a beautiful campus in Chapel Hill. Carolina has a great women’s lacrosse program that I am so excited to play for in the future!” “Conestoga lacrosse has taught me to be the best teammate I can be and to never give up on the opportunities presented to you.” “Beating Radnor on April 9 because Radnor was ranked very high at the time and the team knew it was a game we had to win.” 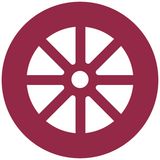