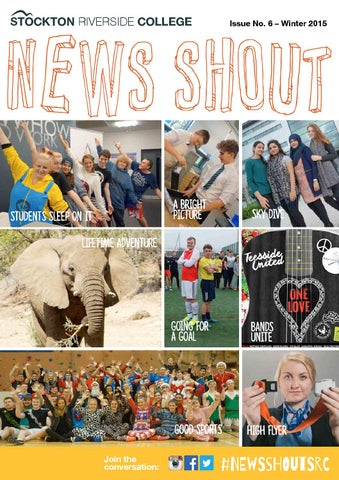 NEWS SHOUT STUDENTS SLEEP ON IT

GOING FOR A GOAL

WELCOME Welcome to News Shout the magazine keeping you up to date with all the latest news and events at Stockton Riverside College and SRC Bede Sixth Form. There’s been loads going on at the College and we hope you’ll enjoy reading about what our students have been getting up to and catching up with our latest success stories. Whether you are a current student, or thinking of joining us, we hope you’ll take a moment to discover what College-life with us is really like.

STUDENTS BRAVE CHARITY SKY FALL Highflying students proved they have nerves of steel by taking part in a charity Skydive. Amber Paleschi, Maariyah Azeem and Sharon Saji, all from Thornaby, all students at SRC Bede Sixth Form, faced their fears as they took turns plummeting 10,000 feet in a tandem jump. “It was just amazing,” said Sharon, 18, who came up with the idea on an impulse after deciding she wanted to try something different and “a bit crazy”. It didn’t take too much persuasion to get her pals on board. The girls, along with Harsimran Kaur, who is still waiting for the weather conditions to be right to do her jump, raised an impressive £3250 for Butterwick Hospice where Sharon is a volunteer.

ELOISE IS A HIGH FLYER It doesn’t get much better than bagging your dream job at 18, just ask Stockton Riverside College student, Eloise Ross. She's been snapped up by British Airways to train as cabin crew after having completed her BTEC Level 3 in Aviation. “It still feels like quite a shock to have got the job,” she said. “Working for British Airways was always my ambition. I know of people who applied several times before even getting an interview." To get an interview and secure the job first time she said is unbelievable. She puts her success down to choosing the right college course along with a lot of hard work and determination. “I 100% wouldn’t have got the job I have without the course,” said the former Hurworth School pupil, who knew from an early age that she wanted to work in cabin crew. Now getting ready to start British Airways' notoriously tough six-week induction programme Eloise is excited but also feeling the nerves. She said: "I think it will be when I get my wings and am given my first flight that it will hit me that this is real."

SCHOOL VISIT PAINTS A BRIGHT PICTURE Students proved there’s more to painting and decorating than magnolia walls when they delivered a lesson at their former school. The dedicated bunch from Stockton Riverside College turned teachers for the day as they headed to Stockton’s North Shore Academy to share some of the skills they’ve learned. Painting and Decorating student Chris Buckle, 17, of Norton, said: “The idea was to come back to our old school and demonstrate some of the techniques that we’ve been learning at College.” Fellow student Daniel Fawcett, 17, also from Norton, added: “It’s good to be able to share our experience with pupils that are in the same position that we were a couple of years ago.” Trying out different paint effects and getting an introduction to the art of shabby chic, the lesson proved a hit with the North Shore pupils.

Have you heard the Teesside anthem, One Love? It’s the charity single bringing together musicians and performers from across the region for a good cause. All proceeds from the single go to local charity, the Finlay Cooper Fund. And SRC Bede Sixth Form is proud to have played its part. The single was recorded and produced by the College’s Assistant Director, Patrick Jordan, Sound Technician, Callum Rattray with the help of Music Technology students. “It was good fun,” said 18-year-old Callum who only completed his own studies at the College last summer. “It was really good to get the chance to work with all the different artists and then bring their performances together.”

The single is a remake of one of Young Rebel Set’s own tracks. The original idea for the charity single came from John Christie, owner of Stockton micro pub The Golden Smog with support from James Beck owner of Stockton’s Ku-Bar and The Storytellers. “It took some organising but fortunately everyone was so supportive and just said ‘Tell me where and when’,” said Patrick. The Finlay Cooper Fund is a Teessidebased charity that raises money for a variety of children’s causes. It’s not too late to get your hands on a copy. One Love by Teesside United can still be downloaded for just £1 from http://teessideunited.bandcamp. com/ and Amazon.

OF A LIFETIME Lessons learnt in the classroom were put to the ultimate test as students embarked on the adventure of a life time. Ten Childcare and Early Years students from Stockton Riverside College visited Namibia in Africa to work at a local school and help the surrounding communities to live in harmony with the region’s wild elephants. “It was the most amazing experience, there aren’t words to describe it,” said BTEC Level 3 Childcare student, Harriet Raine. “It was definitely a once in a lifetime opportunity,” added classmate, Rachael Wilson. Sleeping under the stars the intrepid bunch left behind home comforts to camp out in the Namibian desert. They split their time between painting the children’s dormitory at the Abraham Gariseb School, the region’s only school for 400 miles, and monitoring the elephants in their natural habitat.

“Arriving at the school was quite emotional,” said Harriet, 18, from Yarm. “The children were so enthusiastic to be there even though they had very little.” “Most of the children wore uniforms,” said Rachael from Linthorpe. “It wasn’t until you looked down that you realised only about a quarter were wearing shoes.” As for the elephants, it wasn’t long before the students spotted the giants, with one small herd passing right through camp. Working with Elephant Human Relations Aid (EHRA), the group knew what to do. “You have to stay really still and not make a sound,” said Rachael. “Even if they throw sand you can’t even flinch.” Over the last year the students have taken part in a host of fundraising activities to raise the cash needed to help make the trip possible. Would they do it all again? “I would go again tomorrow,” said Harriet.

Sleep Out for Centrepoint

Sports days aren’t just for the summer, just ask these students from Stockton Riverside College. They warmed up during the wet and wild weather with their own take on the summer classic. The winter sports day saw around 80 of the College’s Sports and Public Services students getting involved. Teams tackled a range of sporting challenges at the SRC Sports Centre in Billingham.

“The idea was just to have a bit of fun at the end of the year,” said BTEC Level 3 Sports student, Scott Bonas. The 20-year-old from Billingham helped organise the event with fellow Level 3 Sports student, Emily Good. With students making a small donation to take part and a tuck shop offering sweet treats, funds raised will go towards the Students’ Sports Award celebrations in the summer.

Students got an insight into life without a warm bed to go to as they played their part in their own Centrepoint Sleep Out. Seven students and six members of staff from The Skills Academy in Billingham turned their backs on their home comforts for a night sleeping “rough” to help raise awareness of homelessness in the UK. “Our aim was to make people think about those that are homeless and in particular the young people in our area with nowhere to call home,” said Academy manager Lorna McLean. Faced with torrential rain and driving winds through the night, the volunteers were fortunate to have the luxury of The Skills Academy to take shelter in, unlike those who have no choice but to brave the elements. “It does make you appreciate what you have,” said Health, Social Care and Childcare student Shannon Moore, 17. Samuel Moore, 17, who is studying Creative Arts and Media, added: “Most think that homeless people are adults, they don’t realise how many young people are living on the streets.” According to Centrepoint, the UK’s leading charity for homeless young people, 83,000 young people experience homelessness every year.

KICKING OFF A FUNDRAISER Students and staff at Stockton Riverside College proved they are on the ball when it comes to doing their bit for a good cause. The fundraisers went head to head in a charity football match, raising money for Middlesbrough baby hospice, Zoe’s Place. “The idea was to bring staff and students together for a bit of fun and raise money for charity at the same time,” said John Cartwright, the College’s Programme Area Leader for Construction, Engineering and Design. John organised the event along with Learning Support Assistant, Tracey Gittus. The match took place at the SRC Sports Centre in Billingham and was one of three fundraising activities arranged by the Construction department, which also included a raffle and collection. After raising more than £500 the students visited Zoe’s Place to find out exactly where the money would be going. Bricklaying student Lewy McCue, 17, of Stockton, said: “I’ve never done anything for charity before but it was good. We raised money for the hospice and also had a laugh getting to know our teachers outside the classroom.”

Come and see for yourself

Want to get a real taste of college life? We have a variety of open events and taster sessions taking place across our sites in Stockton and Billingham offering you the chance to find out if Stockton Riverside College is the place for you. Want to give it a go or can’t find what you’re looking for?

Come and have a go at the subjects that interest you with one of our taster sessions. Tasters last between one and two hours, you’ll meet the teams, have a go and find out if it’s right for you. We have a range of taster sessions coming up in subjects including: Art and Design, Aviation and Travel, Hair and Beauty, Health and Social Care, Hospitality and Catering, Computing, Construction and Engineering, A levels, Sport and Public Services. For times, dates and further details visit: www.stockton.ac.uk/goforit

Explorer Days offer Year 10 pupils the chance to try two or three subjects at the College. Our next event takes place at Stockton Riverside College on Tuesday 5th and Wednesday 6th July 2016.

Are you a careers adviser? Come along to one of our dedicated days and find out exactly what Stockton Riverside College has to offer your students. You will meet the teams and try out some taster sessions for yourself. The next Careers Advisers’ Day takes place Wednesday 9th March 2016, 12.30/1pm–4pm. To book your place at any of our events call 01642 865 566. 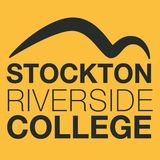