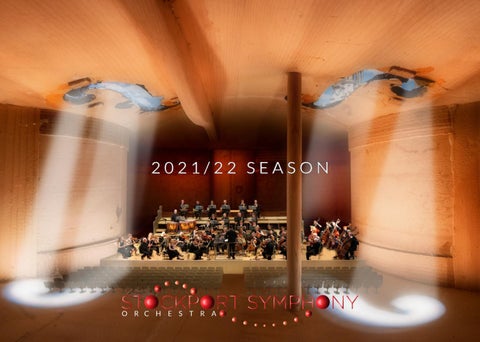 Welcome back It has been a tough year for everyone and we have been itching to get back to playing. While concerts stopped, one thing which did make some progress was our young musicians competition. It had to go on line, of course, but we now have our three fantastic finalists. And what a final it will be - it would have been hard to have picked three more popular concertos. Competition aside it will be a fantastic night of music.

Elsewhere we have, where possible, brought the soloists and conductors who missed out last season back a year later. It does mean the time-shift has one or two consequences: Beethoven 250 - the celebration of his 250th birthday - now becomes Beethoven 251, for example! On the plus side, he was born very late in 1770 so it’s not that far out and means we still get to hear the planned performance of his Triple Concerto - a rare treat in which our own Helen Brackley Jones is joined by two fantastic locally based soloists who are partners both musically and personally . We think the season opener is pretty special too with an American theme, possibly the world’s favourite symphony and a special guest narrator. And talking of narrators we have another treat with our Christmas fairy-tale-themed family concert. You may not have heard of the “Scary Fairy” series words by Craig Charles (of Red Dwarf fame) set to music by Iain Farrington. Modern classics in the Peter and the Wolf tradition. We promise that you and any children you bring along - will love hearing the Scary Fairy take on Red Riding Hood. All that and we haven’t even mentioned Mahler 1, Sibelius 5, Tchaikovsky and, and…read on!

ALL CONCERTS AT STOCKPORT TOWN HALL

Philip Ellis, conductor Helen Brackley Jones. violin Svetlana Mochalova, cello Slava Sidorenko, piano Svetlana Mochalova: “You had the sense that you were listening to the future, and the near future at that.” - James R. Oestreich , New York Times

TCHAIKOVSKY Sleeping Beauty GREGSON Music from The Lion, the Witch and the Wardrobe

“The tone is beautiful, the double-stopped demands of the violin writing are handled with ease, and there is a constant blend of freewheeling rhapsody and musical purpose.”

BEETHOVEN Egmont Overture WALTON Viola Concerto SIBELIUS Symphony No 5 26 FEBRUARY 2022 7.30 PM Delyana Lazarova, conductor Another snippet of Beethoven 251 tonight in the guise of his Egmont Overture. This is followed by the much delayed and equally anticipated return of our SIYMC 2019 winner, Yue Yu. Part of her prize in the competition was the opportunity to perform another concerto with the orchestra but the usual complications have delayed that until now. We can tell you that

everyone who heard her in 2019 can’t wait to hear her interpretation of the lovely Walton concerto for viola. Sibelius 5 - some say it has the greatest finale of all time! Taking his inspiration from a flight of swans, Sibelius’ music soars, the brass a golden glow of sunlight across the Finnish landscape until those final six terrifying chords “Yue Yu was the richlytoned soloist in the Romance for Viola and Orchestra … and the impact will not easily be forgotten” Chistopher Morley

You won’t get too many opportunities to hear these fabulous, much-loved concertos all played in one evening! Covid notwithstanding, our 2021 young musicians competition went ahead, in a slightly different format from previous years.

Despite the pandemic - or perhaps because of it? - the standard of playing was higher than ever and the competition produced three stunning players from across the world in the early years of their careers.

Three outstanding talents and three of the world’s favourite concertos: this is not one to miss!

Brazilian pianist, Rafael Ruiz, 24, has won 20 prizes in piano competitions, including the ‘Antena 2’ Prize, during the XXII SIPO in Portugal and first prize at the I UFRJ Piano Competition, in Brazil. Rafael obtained his Bachelor of Music at the Federal University of Rio de Janeiro under the guidance of Luiz Senise and in 2019 was awarded an ABRSM Scholarship to study at the Royal College of Music, in London, with professors Ian Jones and Sofya Gulyak for a Master’s degree.

Australian cellist Rachel Siu is currently completing her MM degree at The Juilliard School , New York, under the tutelage of Joel Krosnick. She has performed worldwide, including performing with the Guangzhou Symphony Orchestra and The Juilliard School orchestra, working with conductors such as Maestro Long Yu, and Thomas Adès.

From his early childhood Greco-German cellist, Alexander Wollheim, 20, has been interested in making and composing music. Since October 2017, Alexander has been an undergraduate in cello performance under Prof. Danjulo Ishizaka at the Universität der Künste Berlin and he has also taken up a degree in Historical and Contemporary Compositional Technique at the Hochschule für Musik „Hanns Eisler“ Berlin which he is studying simultaneously.

Alexander has participated in master classes with Prof. Ulrich Voss, Angelos Liakakis, Valentin Radutiu and Prof. Troels Svane, as well as Prof. Wolfgang Schmidt at the Cello Akademie Rutesheim. In 2019 he has became a scholarship holder with Yehudi Menuhin Live Music Now Berlin e.V and was second prize winner at the XIV. Gabriellli-Competition at the Berlin University of the Arts in October that year.

Rachel is also an avid teacher, having taught music since 2012 and is a member of the LGT Young Soloists string orchestra

Rachel is also a recipient of many awards, most recently the Gold Medal prize at the VIII David Popper International Cello Competition in Hungary. She was the winner of The Juilliard School competition in 2017.

14 MAY 2022 7.30 PM BRIDGE The Sea PROKOFIEV Piano Concerto No 3 VAUGHAN WILLIAMS Symphony No 2 ‘London’ Lauren Wazynczuk Leon Frantzen, conductors Zany Denyer, piano An evocative English depiction of the sea in its different moods in the first half of this programme conducted by American conductor, Lauren Wazynczuk. In the second, a conductor from the Netherlands interprets an Englishman’s invocation of the sights and sounds of London in the early part of the 20th century. Sir Simon Rattle described Prokofiev&#39;s Piano Concerto No. 3 as a kind of showpiece for the composer to play on the piano. &quot;He’d already written the First and Second Concertos for himself and the Third is very much a mixture of the spirit of Paris in the twenties, and America, and his type of look back at Russia,” The piano part is an astonishing tour de force played for us tonight by young pianist Zany Denyer.

CONDUCTORS Stephen Threlfall is a cellist, conductor and creative director of numerous artistic projects. He recently retired as Director of Music at Chetham&#39;s after 24 years during which the school prospered and developed under his musical guidance and saw the creation of the magnificent new concert space, Stoller Hall. Stephen has conducted at major venues and festivals in the UK with many international solo artists. Engagements have taken him to the USA, Europe and Scandinavia, and seen him conduct locally the Northern Chamber Orchestra, Manchester Camerata and the BBC Philharmonic. He has conducted concerts on radio for the BBC, Classic FM and Russian Radio and TV. His repertoire includes many world premières, notably High on the Slopes of Terror by Sir Peter Maxwell Davies.

DELYANA LAZAROVA- FEBRUARY Delyana was the 2020 first-prize winner of the SiemensHallé International Competition for Conductors and is now Assistant Conductor to Sir Mark Elder at the Hallé, and Music Director of the Hallé Youth Orchestra. Also winner of the NRTA International Conducting Competition in Tirana, in 2019, Delyana has received a Conducting Award at the Aspen Music Festival, and the Bruno Walter Conducting Scholarship at the Cabrillo Festival, California in 2017 and 2018. This season she is assistant conductor of the Orchestra National de France which she takes on tour in January, 2022.

BE PART OF IT

We believe the SSO is unique amongst non-professional orchestras in staging a season of eight concerts with great professional conductors and international soloists. We are only able to do so with the much appreciated help of our audience, Stockport MBC and our Patrons.

● Concessionary £13 (holders of JSA, OAPs and leisure key) ● Full-time students up to 21 years of age £5 Under 16s are FREE when accompanied by a full price or concessionary adult (excluding Christmas - children’s tickets £5).

TICKETS ARE AVAILABLE: ● Through our online booking system at www.ticketsource.co.uk/sso (a small booking fee applies)

● By calling the Box Office on 07947 474574 ● By post from 26 Bodmin Ave, Macclesfield SK10 3JU (please send SAE and cheque payable to Stockport Symphony Orchestra) ● From the orchestra stand at the back of the hall at concerts If ticket sales on the door are not possible, online purchases will be available until shortly before the concerts. Please be aware that tickets may be for timed entry slots.

We want to continue to promote our role as part of the cultural bedrock of Stockport. We provide much-needed support and encouragement to young musicians at the early stages of their careers and with initiatives like our Young Musicians Competition, we believe we bring something unique and special to the cultural life of the town. If you would like a closer involvement with the orchestra and help to maintain our commitment to music in Stockport for the next 40 years, please please consider becoming a Patron and buying a season ticket and make Stockport’s orchestra your orchestra : email sponsorship@stockportsymphony.co.uk call at the orchestra stand at the back of the hall; or just speak to a member of the orchestra. In return you will receive (where permitted by covid regulations) : ● A reserved seat for concerts for which you buy tickets ●Acknowledgement in the programme

SEASON TICKETS A ticket for all the concerts of the season can be purchased at the back of the hall at the first concert making your first concert free! And in the event that audience numbers have to be restricted you will have priority though we can not guarantee any particular seat.

GROUP DISCOUNTS Why not come with a group of friends? Buy 10 tickets, pay for only 9. Contact the Box Office for details.

●Pre-concert talks on selected concerts ●Invitation to a post-concert drink after two of the concerts with an opportunity to chat to conductor, leader or soloist ● Preferential booking where possible if audience numbers restricted by coronavirus rules Minimum donation £65 single £115 joint