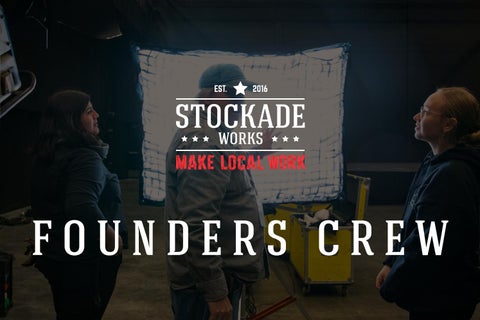 Stockade Works, founded in 2016 by Mary Stuart Masterson, is dedicated to furthering the potential of film, television, media and tech in the Hudson Valley through workforce development training programs for local residents. We are developing an ecosystem for film production in the Hudson Valley by creating jobs in the region, with a focus on those individuals typically barred from economic opportunity. Stockade Works focuses on job creation through workforce development training programs in film and television production and engages in retention efforts to ensure jobs stay in the HV region so local residents can work where they live.

Since inception, we have trained over 100 Hudson Valley residents and placed over 70 graduates in production jobs. Stockadeâ&amp;#x20AC;&amp;#x2122;s goal is to train 100 crew members annually and create more than 1000 job opportunities by 2021. Stockade Works is at a pivotal and exciting chapter, from growing its leadership and staff and developing new programs, trainings and bootcamps, to establishing a permanent home in Kingston and continuing to strengthen its partnerships with community, industry and investor stakeholders.

applicants who have an interest in working as crew on film and television productions. This program is designed to give participants an opportunity to learn hands-on from industry professionals so that they are ready to go directly from the training to working on a real set. Boot Camps and all training programs are designed to respond to the ongoing needs of the film &amp; television industry, and the professionals with whom we work, to fill the crew gaps in the region.

TRAINING &amp; APPRENTICESHIP PROGRAM This is a unique opportunity for participants to hone skills in fiction, documentary, and organizational filmmaking and put those skills to work on local productions. Part internship, part work, this innovative pilot program teaches the ins and outs of all aspects of working on a production, from administrative and marketing to equipment training and on-set work.

Stockade Works provides at least 50% full or partial scholarships to all participants in our training programs.

Stockade Works has taken me from never working on a real film or TV production, to working on an HBO series, right out of the gate. Since taking their crew bootcamp, I’ve been a PA and a background actor and I am now SAG eligible.” Daniel Gonzalez, 2019 Boot Camp graduate, US Military Veteran

Stockade Works is an excellent opportunity for people who have an interest in film and television production. Not only can they learn the basic skills of each department, they can get advice and insights from working professionals. It is my goal as a Costume Designer to train crews and encourage shows to shoot in the Hudson Valley and hire locally.” Lisa Padovani, Award-winning costume designer &amp; SW program instructor

Stockade Works is pleased to launch our Founders Crew, which celebrates donors who provide long lasting gifts to support Stockade Works programs, strategic planning and growth for the future. Founders Crew donors will ultimately pledge their commitments for 5 to 10

ABOUT THE FOUNDERS CREW

consecutive years. These legacy gifts will allow for the greatest impact to expand our programs, transform the lives of local residents and further the growth of talent in the media, film and television community throughout the Hudson Valley, a place that is near and dear to all of our hearts. As a Founders Crew donor your gift can range in generosity from $500 to $25,000 to help sustain Stockadeâ&amp;#x20AC;&amp;#x2122;s programs on an annual basis. Your philanthropy and commitment to our mission and our work has never been more important. Stockade Works will continue to grow and strengthen from the generosity and support of our Founders Crew members.

With gratitude from the Stockade Works Team

Stockade Works’ Boot Camp was one of the best career decisions I have made. Learning and working with industry professionals was not only informative, each instructor was enthusiastic to teach the attendees. I would urge anyone who is interested in joining the film industry to apply to this boot camp.” Katie Hock, 2019 Boot Camp graduate

“Stockade Works was an invaluable resource for the production during our 9 month shoot in the Hudson Valley. Their recommendations for local crew members were insightful and their Boot Camp graduates were prepared, knowledgeable, and most importantly, enthusiastic to be on set. I would strongly recommend working with Stockade Works to any production looking to shoot in the Hudson Valley.” Marshall Johnson, Unit Production Manager, I Know This Much is True

Founders Crew support will be directly invested into expanding our training programs and serving those in the community who will benefit most directly, by: • Increasing the number of annual training programs held including Crew Boot Camps, Workshops, and Apprenticeship Programs • Expansion of post-training Mentorship and Job Placement services offered to all program graduates • Funding scholarships that allow those who may not otherwise have access, to be able to enroll in Stockade’s training programs • Expanding outreach efforts to those in the community who face the greatest barriers to employment in the industry: women, people of color, those who are unemployed, and military veterans. • Developing extensive partnerships with local SUNY and BOCES schools to provide career awareness programs, skills building and curriculum development for local college students

By the end of 2018, 90 productions spent an estimated $250 million on qualified costs outside NYC. Almost $70 million of that was directly spent on qualified labor (JOBS) upstate.

These are some of the benefits our Founders Crew Donors can receive: • Private tour on a tv or film set accompanied by Mary Stuart Masterson • Special invitation to annual Founders Crew reception • Invites to special screenings and premieres • Listing in our Annual Report

Please contact Marie Nachsin, Executive Director, at mnachsin@stockadeworks.org or 347-268-2407 for more information or to join our Founders Crew.