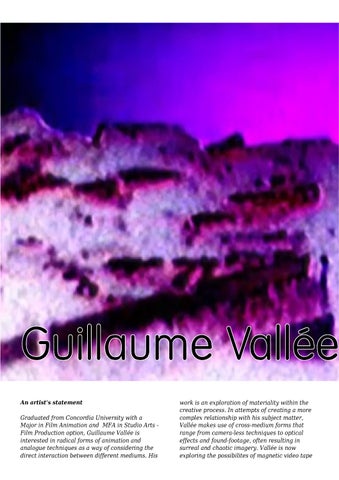 Graduated from Concordia University with a Major in Film Animation and MFA in Studio Arts Film Production option, Guillaume Vallée is interested in radical forms of animation and analogue techniques as a way of considering the direct interaction between different mediums. His

work is an exploration of materiality within the creative process. In attempts of creating a more complex relationship with his subject matter, Vallée makes use of cross-medium forms that range from camera-less techniques to optical effects and found-footage, often resulting in surreal and chaotic imagery. Vallée is now exploring the possibilites of magnetic video tape