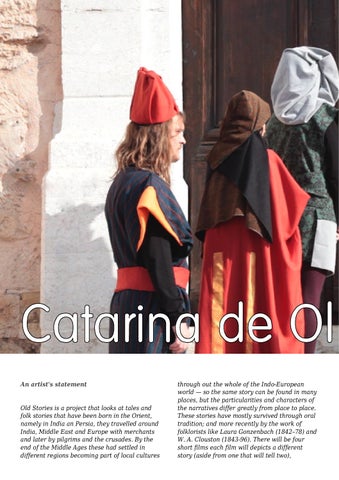 Old Stories is a project that looks at tales and folk stories that have been born in the Orient, namely in India an Persia, they travelled around India, Middle East and Europe with merchants and later by pilgrims and the crusades. By the end of the Middle Ages these had settled in different regions becoming part of local cultures

through out the whole of the Indo-European world â&amp;#x20AC;&amp;#x201D; so the same story can be found in many places, but the particularities and characters of the narratives differ greatly from place to place. These stories have mostly survived through oral tradition; and more recently by the work of folklorists like Laura Gonzenbach (1842â&amp;#x20AC;&amp;#x201C;78) and W. A. Clouston (1843-96). There will be four short films each film will depicts a different story (aside from one that will tell two),