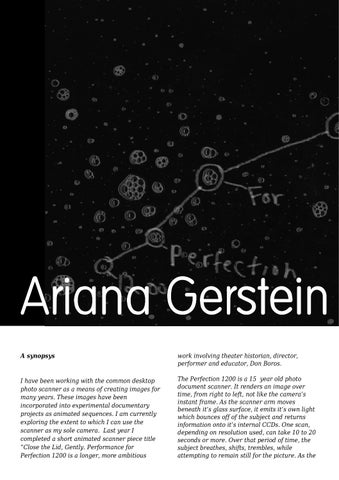 I have been working with the common desktop photo scanner as a means of creating images for many years. These images have been incorporated into experimental documentary projects as animated sequences. I am currently exploring the extent to which I can use the scanner as my sole camera. Last year I completed a short animated scanner piece title “Close the Lid, Gently. Performance for Perfection 1200 is a longer, more ambitious

The Perfection 1200 is a 15 year old photo document scanner. It renders an image over time, from right to left, not like the camera’s instant frame. As the scanner arm moves beneath it’s glass surface, it emits it’s own light which bounces off of the subject and returns information onto it’s internal CCDs. One scan, depending on resolution used, can take 10 to 20 seconds or more. Over that period of time, the subject breathes, shifts, trembles, while attempting to remain still for the picture. As the