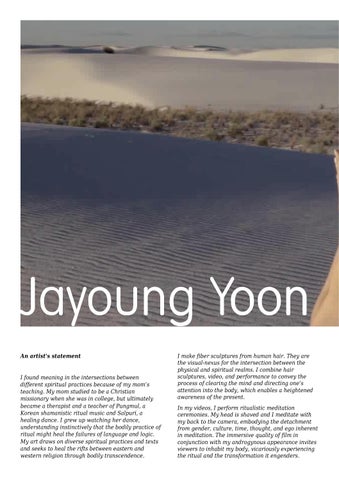 I found meaning in the intersections between different spiritual practices because of my momâ&#x20AC;&#x2122;s teaching. My mom studied to be a Christian missionary when she was in college, but ultimately became a therapist and a teacher of Pungmul, a Korean shamanistic ritual music and Salpuri, a healing dance. I grew up watching her dance, understanding instinctively that the bodily practice of ritual might heal the failures of language and logic. My art draws on diverse spiritual practices and texts and seeks to heal the rifts between eastern and western religion through bodily transcendence.

I make fiber sculptures from human hair. They are the visual-nexus for the intersection between the physical and spiritual realms. I combine hair sculptures, video, and performance to convey the process of clearing the mind and directing oneâ&#x20AC;&#x2122;s attention into the body, which enables a heightened awareness of the present. In my videos, I perform ritualistic meditation ceremonies. My head is shaved and I meditate with my back to the camera, embodying the detachment from gender, culture, time, thought, and ego inherent in meditation. The immersive quality of film in conjunction with my androgynous appearance invites viewers to inhabit my body, vicariously experiencing the ritual and the transformation it engenders.