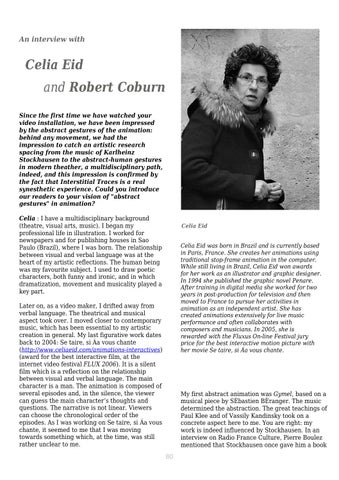 Celia Eid and Robert Coburn Since the first time we have watched your video installation, we have been impressed by the abstract gestures of the animation: behind any movement, we had the impression to catch an artistic research spacing from the music of Karlheinz Stockhausen to the abstract-human gestures in modern theather, a multidisciplinary path, indeed, and this impression is confirmed by the fact that Interstitial Traces is a real synesthetic experience. Could you introduce our readers to your vision of "abstract gestures" in animation? Celia : I have a multidisciplinary background (theatre, visual arts, music). I began my professional life in illustration. I worked for newspapers and for publishing houses in Sao Paulo (Brazil), where I was born. The relationship between visual and verbal language was at the heart of my artistic reflections. The human being was my favourite subject. I used to draw poetic characters, both funny and ironic, and in which dramatization, movement and musicality played a key part.

Celia Eid was born in Brazil and is currently based in Paris, France. She creates her animations using traditional stop-frame animation in the computer. While still living in Brazil, Celia Eid won awards for her work as an illustrator and graphic designer. In 1994 she published the graphic novel Penare. After training in digital media she worked for two years in post-production for television and then moved to France to pursue her activities in animation as an independent artist. She has created animations extensively for live music performance and often collaborates with composers and musicians. In 2005, she is rewarded with the Fluxus On-line Festival jury price for the best interactive motion picture with her movie Se taire, si Áa vous chante.

Later on, as a video maker, I drifted away from verbal language. The theatrical and musical aspect took over. I moved closer to contemporary music, which has been essential to my artistic creation in general. My last figurative work dates back to 2004: Se taire, si Áa vous chante (http://www.celiaeid.com/animations-interactives) (award for the best interactive film, at the internet video festival FLUX 2006). It is a silent film which is a reflection on the relationship between visual and verbal language. The main character is a man. The animation is composed of several episodes and, in the silence, the viewer can guess the main character’s thoughts and questions. The narrative is not linear. Viewers can choose the chronological order of the episodes. As I was working on Se taire, si Áa vous chante, it seemed to me that I was moving towards something which, at the time, was still rather unclear to me.

My first abstract animation was Gymel, based on a musical piece by SÈbastien BÈranger. The music determined the abstraction. The great teachings of Paul Klee and of Vassily Kandinsky took on a concrete aspect here to me. You are right: my work is indeed influenced by Stockhausen. In an interview on Radio France Culture, Pierre Boulez mentioned that Stockhausen once gave him a book