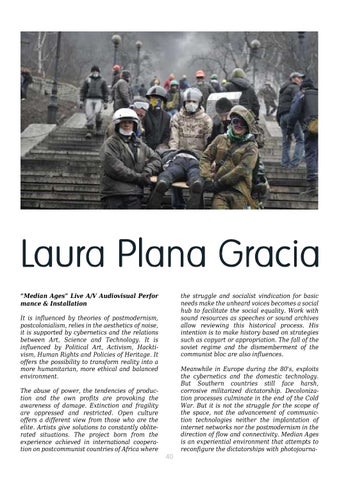 the struggle and socialist vindication for basic needs make the unheard voices becomes a social hub to facilitate the social equality. Work with sound resources as speeches or sound archives allow reviewing this historical process. His intention is to make history based on strategies such as copyart or appropriation. The fall of the soviet regime and the dismemberment of the communist bloc are also influences.

It is influenced by theories of postmodernism, postcolonialism, relies in the aesthetics of noise, it is supported by cybernetics and the relations between Art, Science and Technology. It is influenced by Political Art, Activism, Hacktivism, Human Rights and Policies of Heritage. It offers the possibility to transform reality into a more humanitarian, more ethical and balanced environment.

Meanwhile in Europe during the 80's, exploits the cybernetics and the domestic technology. But Southern countries still face harsh, corrosive militarized dictatorship. Decolonization processes culminate in the end of the Cold War. But it is not the struggle for the scope of the space, not the advancement of communiction technologies neither the implantation of internet networks nor the postmodernism in the direction of flow and connectivity. Median Ages is an experiential environment that attempts to reconfigure the dictatorships with photojourna-

The abuse of power, the tendencies of production and the own profits are provoking the awareness of damage. Extinction and fragility are oppressed and restricted. Open culture offers a different view from those who are the elite. Artists give solutions to constantly obliterated situations. The project born from the experience achieved in international cooperation on postcommunist countries of Africa where