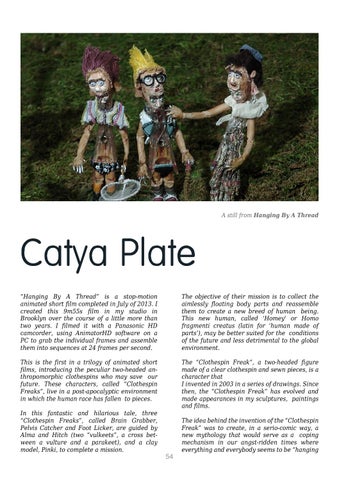 A still from Hanging By A Thread

Catya Plate “Hanging By A Thread” is a stop-motion animated short film completed in July of 2013. I created this 9m55s film in my studio in Brooklyn over the course of a little more than two years. I filmed it with a Panasonic HD camcorder, using AnimatorHD software on a PC to grab the individual frames and assemble them into sequences at 24 frames per second.

The objective of their mission is to collect the aimlessly floating body parts and reassemble them to create a new breed of human being. This new human, called 'Homey' or Homo fragmenti creatus (latin for ‘human made of parts’), may be better suited for the conditions of the future and less detrimental to the global environment.

This is the first in a trilogy of animated short films, introducing the peculiar two-headed anthropomorphic clothespins who may save our future. These characters, called “Clothespin Freaks”, live in a post-apocalyptic environment in which the human race has fallen to pieces.

In this fantastic and hilarious tale, three “Clothespin Freaks”, called Brain Grabber, Pelvis Catcher and Foot Licker, are guided by Alma and Hitch (two “vulkeets”, a cross between a vulture and a parakeet), and a clay model, Pinki, to complete a mission.

The idea behind the invention of the “Clothespin Freak” was to create, in a serio-comic way, a new mythology that would serve as a coping mechanism in our angst-ridden times where everything and everybody seems to be “hanging