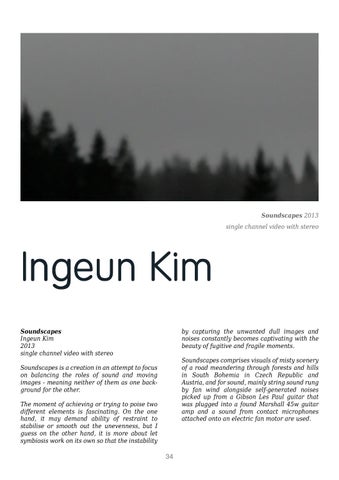 by capturing the unwanted dull images and noises constantly becomes captivating with the beauty of fugitive and fragile moments.Â&amp;#x20AC; Soundscapes comprises visuals of misty scenery of a road meandering through forests and hills in South Bohemia in Czech Republic and Austria, and for sound, mainly string sound rung by fan wind alongside self-generated noises picked up from a Gibson Les Paul guitar that was plugged into a found Marshall 45w guitar amp and a sound from contact microphones attached onto an electric fan motor are used.Â&amp;#x20AC;

Soundscapes is a creation in an attempt to focus on balancing the roles of sound and moving images - meaning neither of them as one background for the other. The moment of achieving or trying to poise two different elements is fascinating. On the one hand, it may demand ability of restraint to stabilise or smooth out the unevenness, but I guess on the other hand, it is more about let symbiosis work on its own so that the instability