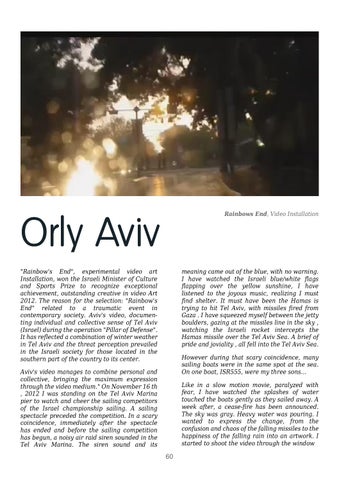 meaning came out of the blue, with no warning. I have watched the Israeli blue/white flags flapping over the yellow sunshine, I have listened to the joyous music, realizing I must find shelter. It must have been the Hamas is trying to hit Tel Aviv, with missiles fired from Gaza . I have squeezed myself between the jetty boulders, gazing at the missiles line in the sky , watching the Israeli rocket intercepts the Hamas missile over the Tel Aviv Sea. A brief of pride and joviality , all fell into the Tel Aviv Sea.

"Rainbow's End", experimental video art Installation, won the Israeli Minister of Culture and Sports Prize to recognize exceptional achievement, outstanding creative in video Art 2012. The reason for the selection: "Rainbow's End" related to a traumatic event in contemporary society. Aviv's video, documenting individual and collective sense of Tel Aviv (Israel) during the operation "Pillar of Defense". It has reflected a combination of winter weather in Tel Aviv and the threat perception prevailed in the Israeli society for those located in the southern part of the country to its center.

However during that scary coincidence, many sailing boats were in the same spot at the sea. On one boat, ISR555, were my three sonsâ&#x20AC;Ś

Aviv's video manages to combine personal and collective, bringing the maximum expression through the video medium." On November 16 th , 2012 I was standing on the Tel Aviv Marina pier to watch and cheer the sailing competitors of the Israel championship sailing. A sailing spectacle preceded the competition. In a scary coincidence, immediately after the spectacle has ended and before the sailing competition has begun, a noisy air raid siren sounded in the Tel Aviv Marina. The siren sound and its

Like in a slow motion movie, paralyzed with fear, I have watched the splashes of water touched the boats gently as they sailed away. A week after, a cease-fire has been announced. The sky was gray. Heavy water was pouring. I wanted to express the change, from the confusion and chaos of the falling missiles to the happiness of the falling rain into an artwork. I started to shoot the video through the window