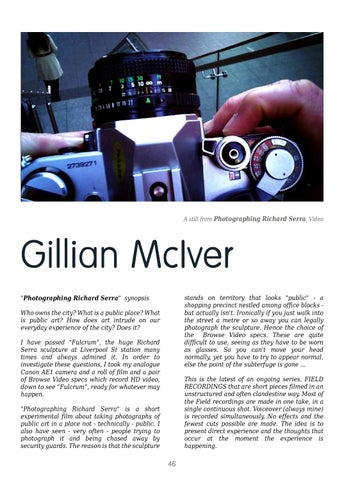 Gillian McIver stands on territory that looks &quot;public&quot; - a shopping precinct nestled among office blocks but actually isn&#39;t. Ironically if you just walk into the street a metre or so away you can legally photograph the sculpture. Hence the choice of the Browse Video specs. These are quite difficult to use, seeing as they have to be worn as glasses. So you can&#39;t move your head normally, yet you have to try to appear normal, else the point of the subterfuge is gone ...

&quot;Photographing Richard Serra&quot; synopsis Who owns the city? What is a public place? What is public art? How does art intrude on our everyday experience of the city? Does it? I have passed “Fulcrum”, the huge Richard Serra sculpture at Liverpool St station many times and always admired it. In order to investigate these questions, I took my analogue Canon AE1 camera and a roll of film and a pair of Browse Video specs which record HD video, down to see “Fulcrum”, ready for whatever may happen.

This is the latest of an ongoing series, FIELD RECORDINGS that are short pieces filmed in an unstructured and often clandestine way. Most of the Field recordings are made in one take, in a single continuous shot. Voiceover (always mine) is recorded simultaneously. No effects and the fewest cuts possible are made. The idea is to present direct experience and the thoughts that occur at the moment the experience is happening.

&quot;Photographing Richard Serra&quot; is a short experimental film about taking photographs of public art in a place not - technically - public. I also have seen - very often - people trying to photograph it and being chased away by security guards. The reason is that the sculpture

Since its foundation, Stigmart10 has encouraged a conception of art based on a dynamic dialogue between artists and audience, reflecting the interactive nature of the creative act itself. A winning formula, according to the doubled number of submissions - more than 990 applicants have sumitted their video works and CV in 2013 - and the increasing popularity of our project. We are glad to present this year's edition of Videofocus, our special Stigmart10 review focused on experimental cinema, original fashion videography and corageous documentary.