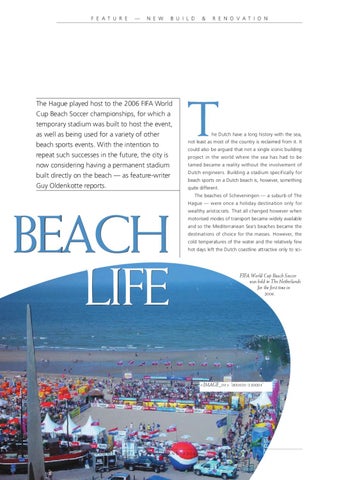 The Hague played host to the 2006 FIFA World Cup Beach Soccer championships, for which a temporary stadium was built to host the event, as well as being used for a variety of other beach sports events. With the intention to repeat such successes in the future, the city is now considering having a permanent stadium built directly on the beach — as feature-writer Guy Oldenkotte reports.

he Dutch have a long history with the sea,

not least as most of the country is reclaimed from it. It could also be argued that not a single iconic building project in the world where the sea has had to be tamed became a reality without the involvement of Dutch engineers. Building a stadium specifically for beach sports on a Dutch beach is, however, something quite different. The beaches of Scheveningen — a suburb of The Hague — were once a holiday destination only for

wealthy aristocrats. That all changed however when motorised modes of transport became widely available and so the Mediterranean Sea’s beaches became the destinations of choice for the masses. However, the cold temperatures of the water and the relatively few hot days left the Dutch coastline attractive only to sci-

FIFA World Cup Beach Soccer was held in The Netherlands for the first time in 2006.

The design of the new stadium allows for various extensions, such as additional catering etc., with a capacity of 4,400-seats extendable to 8,000.

took the opportunity to gain familiarity with the general public. For three consecutive months the beach at Scheveningen was the place to be, and both the local government and economy benefited hugely from this. The Hague’s city hall officials immediately made plans for further beach sports events to take place this summer and will once again be making a temporary stadium available to host such events. Their future intentions for the construction of a permanent structure are also clear, with an initial study having already been conducted. entists and specialists involved in protecting the coun-

try from the sea. The structures Dutch engineers have built over the

nothing to compare it with. But within the Royal Bam

years to prevent The Netherlands from flooding have

Group there is enough expertise to make it become

become of interest to a wider audience, with the team

in charge of protecting New Orleans from another Hur-

The Royal Bam Group was also recently assigned to

the renovation project for Soccer City in Johannesburg,

region. However, actually spending your holiday in The

South Africa. This stadium will become the main venue

Netherlands was left for those who couldn’t afford bet-

during the 2010 FIFA World Cup event. (Please refer to

ter or who only had a few days vacation time. Thanks

to a changing climate with more frequent and warmer

days, and a different approach from the cities along

“It is our intention to have it [the stadium] integrat-

the coast, the North Sea coast in Holland is once again

ed into the boulevard. Temporary extensions during the

summertime or during special events could then be added on the beach side. To make the stadium become

profitable, we believe that it is vital that the project is

It was the growing popularity of beach sports that

structured on a multi-functional use, including sport

made the Dutch city of The Hague bid successfully for

and entertainment. Half of the venue’s income should

be generated from sports activities with the rest to

beautiful summer and the triumph of the event culmi-

come from other events, like plays or small concerts.

nated in the successful hosting of the European Cham-

But it is essential that the stadium will be available for

pionship Beach Volleyball in the same stadium, while

all, and can be used by everybody,” Engelbert van Bev-

The main stand will be sea-facing, allowing spectators magnificent views beyond the breakers.

BEACH LIFE However, without financial backing from the gov-

decided on a per event basis as to what additional

ernment, Engelbert van Bevervoorde had to go for a

facilities should be added temporarily. As she explains:

different approach: “As the municipality prefers to

have the stadium operated by someone else, we have

catering and toilet facilities. It depends on the type of

established a foundation in which all parties concerned

event as to what extra needs to be brought in. All

participate. Within this foundation plans are being dis-

these facilities can than be rented.”

cussed and prepared to make it become reality.” A limited number of facilities, like dressing rooms

The location of the stadium on the beach, along with the materials used in its construction, will echo the atmosphere you would experience on a beach in Florida.

and toilets, are supposed to be included in the basic

With the outcome of the study, architectural firm,

structure. “It will become a semi-permanent stadium

with a capacity of 4,400-seats, which can be extended

“The beach and the boulevard are public places.

The stadium is supposed to become an integrated part

of the boulevard, which makes it important that peo-

With the ever increasing list of facilities needed for

ple feel invited to walk in, have a seat, and enjoy a

match or just the view. This was essential for us to have

Engelbert van Bevervoorde believes that it should be

that translated into our design,” says architect Meindert Booij. In the initial design the main stand therefore faces the sea, as Booij explains: “During the summer you can enjoy a match from here, or the beautiful view from

the sea. And with this part of the beachfront being perfect for windsurfing it can also be used as a stand to enjoy the sports taking place beyond the breakers.” This initial design looks elegant but simple, as Booij outlines: “In my opinion, it is key to have a stadium that looks like a stadium. When you take, for example, some of the designs of new football stadiums that are currently being built, you will see that there is a tendency to design massive structures and build ‘on’ the ground. We felt that it is important to build ‘in’ the ground, to make the venue even more integrated with its surroundings. The Olympic Stadium in Japan and ➲

Beach Volleyball is currently the only beach sport that is recognised by the International Olympic Committee (IOC).

the Olympic Stadium in Munich

Booij is carefully considering his choice of what should

are beautiful examples of stadiums that

be used, as he explains: “Personally, I would prefer to

have become part of their environment in this way.”

use wood, as this will make it more beautiful and cre-

Despite the fact that the stadium should be prof-

ates more of an atmosphere. It also contributes to the

itable in its own right, Booij has no major catering or

beach lifestyle. The structure should become some-

other commercial facilities included in the design.

thing similar to the piers you see in Florida for example.

According to him, these should be built next to the sta-

But we are still discussing this as this will affect the

dium, separate from the bowl: “These facilities should

price of the stadium.

be operated separately. During events we can have

“Besides that, we will also have to negotiate with

structures included which create a concourse where

the Ministry of Transport and Waterworks since the

people can walk, have their drinks or just enjoy the

stadium is due to be built outside the main weir. Obvi-

views, all while they are inside the stadium perimeter.

ously they want to ensure no materials are used that

But we think that they should originally be kept apart.”

With the harsh conditions of the coast, where wind, sand and salt all take their toll on building materials, SUMMER 2007

off the stadium.” To ensure the stadium will be able to withstand the

BEACH LIFE vigour of the sea,

more studies will have to be per-

outlines: “Before we start building this stadium we will

formed, as Booij points out: “One of the things we will

national government have executed their plans for fur-

flow. It is possible that, due to the stand, the wind flow

ther enforcing the structures that protect the country

will change and have more of an affect on the build-

from the sea. The boulevard is part of that. As soon as

that is finished, we can start building.”

With plans to have the surrounding area around the

ists and scientists ruling over the beach babes in this

region. But once the new stadium is complete, it will be all change on the Dutch beaches answer to Copa Cabana. ✪

First things First With the affects of global warming meaning that sea levels are continually rising, it is vital to have everything in place to prevent the stadium from becoming a SUMMER 2007

Years ago the Dutch introduced Beach Handball, which eventually gained popularity in other countries.

It is planned that the stadium will eventually become a place not just for sport but also for music and dance, and other forms of entertainment. 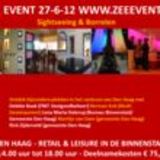