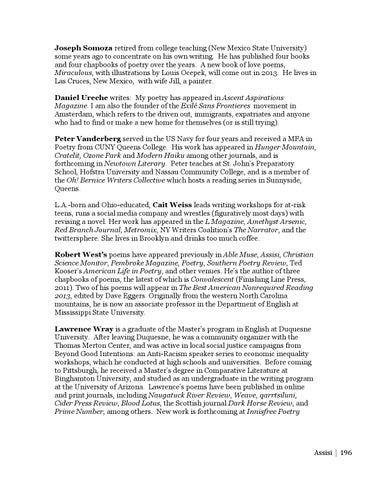 Joseph Somoza retired from college teaching (New Mexico State University) some years ago to concentrate on his own writing. He has published four books and four chapbooks of poetry over the years. A new book of love poems, Miraculous, with illustrations by Louis Ocepek, will come out in 2013. He lives in Las Cruces, New Mexico, with wife Jill, a painter. Daniel Ureche writes: My poetry has appeared in Ascent Aspirations Magazine. I am also the founder of the Exilé Sans Frontieres movement in Amsterdam, which refers to the driven out, immigrants, expatriates and anyone who had to find or make a new home for themselves (or is still trying). Peter Vanderberg served in the US Navy for four years and received a MFA in Poetry from CUNY Queens College. His work has appeared in Hunger Mountain, Cratelit, Ozone Park and Modern Haiku among other journals, and is forthcoming in Newtown Literary. Peter teaches at St. John’s Preparatory School, Hofstra University and Nassau Community College, and is a member of the Oh! Bernice Writers Collective which hosts a reading series in Sunnyside, Queens. L.A.-born and Ohio-educated, Cait Weiss leads writing workshops for at-risk teens, runs a social media company and wrestles (figuratively most days) with revising a novel. Her work has appeared in the L Magazine, Amethyst Arsenic, Red Branch Journal, Metromix, NY Writers Coalition’s The Narrator, and the twittersphere. She lives in Brooklyn and drinks too much coffee. Robert West’s poems have appeared previously in Able Muse, Assisi, Christian Science Monitor, Pembroke Magazine, Poetry, Southern Poetry Review, Ted Kooser’s American Life in Poetry, and other venues. He&#39;s the author of three chapbooks of poems, the latest of which is Convalescent (Finishing Line Press, 2011). Two of his poems will appear in The Best American Nonrequired Reading 2013, edited by Dave Eggers. Originally from the western North Carolina mountains, he is now an associate professor in the Department of English at Mississippi State University. Lawrence Wray is a graduate of the Master’s program in English at Duquesne University. After leaving Duquesne, he was a community organizer with the Thomas Merton Center, and was active in local social justice campaigns from Beyond Good Intentions: an Anti-Racism speaker series to economic inequality workshops, which he conducted at high schools and universities. Before coming to Pittsburgh, he received a Master’s degree in Comparative Literature at Binghamton University, and studied as an undergraduate in the writing program at the University of Arizona. Lawrence’s poems have been published in online and print journals, including Naugatuck River Review, Weave, qarrtsiluni, Cider Press Review, Blood Lotus, the Scottish journal Dark Horse Review, and Prime Number, among others. New work is forthcoming at Innisfree Poetry

Assisi is an online journal of Arts & Letters 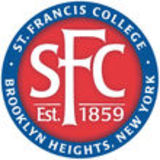