Rusty and the Rainbow 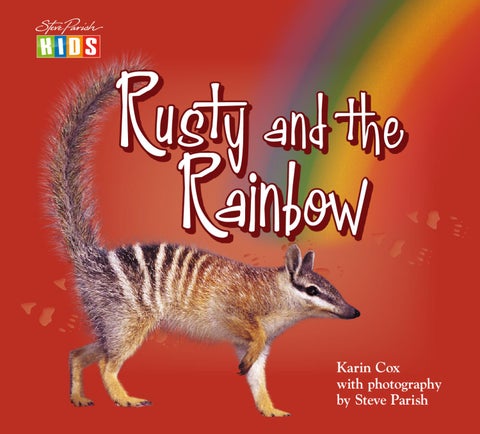 Rusty the numbat hurried out of his hollow log early every morning. He loved to be out and about by day. Most of his friends were night animals, but Rusty didnâ&amp;#x20AC;&amp;#x2122;t mind. He and his friend Pogo the western brush wallaby had all sorts of adventures while the other animals slept.

If they couldn’t find an adventure, they would go hunting for it, prying into wombat’s log, daring each other to go near fox’s lair or poking about in a cave or a deep tree hollow. Sometimes they even got up to so much mischief that night-time animals, like Whirr the western quoll, would wake up and tell them to, “Keep it down”.

Shhh! Keep it down.

Other times, they would simply sit on the grass and tell stories about the animals they could see in the fluffy white and grey clouds above. Then one day, as they were cloud watching, an adventure found them.

Instead of clouds passing overhead, a beautiful rainbow shone down, colouring the hills and the woodlands with green, purple and yellow. “Look! A rainbow!” cried Rusty. “I’ve heard there is a pot of gold at the end of every rainbow,” added Pogo. “Let’s chase that rainbow, and find some treasure!”

“Sounds like an adventure,” agreed Pogo, and off they went. They were running very fast to catch the rainbow, so it wasn’t long before they met some parrots. “What’s the rush? Is there a fire?” twittered one parrot nervously. “No,” replied Rusty, “but we can’t stop — we’ve got a rainbow to catch.”

“A rainbow!” chuckled the birds. “You’ll never catch that!”

“I think we can,” said Pogo. “We’re very fast.” “I’m sure you are,” said the parrot, “but we are rainbow lorikeets, so we know a thing or two about rainbows. Many times I have tried to perch on a rainbow, to match my beautiful feathers, but I have never been quick enough. Good luck all the same.” Rusty and Pogo hurried on. They had no time to waste if they were to catch that rainbow and find a pot of gold.

They hadn’t gone far when they came to a creek. By the time Pogo had dipped his nose in, a fish had appeared. “What’s all the fuss?” asked the fish. “Is a snake chasing you?” “Not in the least,” said Rusty. “Actually, it’s our lucky day. We’ve got a rainbow to catch.” “Excuse me, did you say a rainbow?” said the fish with a giggle.

“Yes we did,” said Pogo. “What’s so funny about that?” “My wife and I are rainbow fish, you see,” explained the fish. “Many times we have tried to swim into the beautiful reflection of a rainbow as it strikes the water, to match our lovely colours, but as soon as we get there, it vanishes.”

“Vanishes, huh?” said Pogo. “Well, let’s see this one vanish. We must be very close by now.” And Pogo and Rusty raced on.

They had to stop suddenly when a bird hovered before them. “What’s all the panic?” asked the bird. “Are dogs chasing you?” “Not at all,” puffed Rusty. “We’re chasing a rainbow. I’ve heard there’s a pot of gold at the end.” “Tsk tsk,” chirped the bird. “I’m sorry but you’ll never catch a rainbow. I can assure you that the only thing at the end of a rainbow is a lot of disappointment.”

“How do you know that?” asked Pogo, who was getting tired of others telling him their adventure was impossible. “I am a rainbow bee-eater,” the bird told them. “Many times I have thought that the end of the rainbow would make a lovely place to store my bees, but whenever I fly after one, even as fast as fast can be, I can’t catch it.” “We’ll let you know if we do,” cried Rusty, who had climbed a tree to look for the rainbow. “Look, there it is! We must be close now.”

Soon they reached the spot where the rainbow had first been seen beaming down. â&amp;#x20AC;&amp;#x153;Quick, Rusty, start digging,â&amp;#x20AC;? urged Pogo, who was so tired from all that hopping that he needed a rest. Rusty wasted no time at all. Within seconds he was digging away as fast as his little legs could dig.

But there was no pot of gold to be seen. Soon, the sun disappeared behind a cloud and they could hardly even see the rainbow anymore. â&amp;#x20AC;&amp;#x153;How about over there?â&amp;#x20AC;? suggested Pogo, and once again Rusty dug and dug and dug. He found nothing. Both of them were beginning to think that the rainbow lorikeets and the rainbow fish and the rainbow bee-eater might have been right after all.

“It’s a nest full of termites — my favourite food — and I’m very hungry after all that rainbow chasing,” said Rusty, lapping up the ants with his long tongue. “Maybe there is more than just disappointment at the end of a rainbow,” agreed a rainbow lorikeet, who had flown by to see how the search was going. “At least for Rusty,” said Pogo, who did not like termites.

Right at that moment, the sun came out from behind the cloud, and the rainbow shone brilliantly down from the sky. It made the trees blue and turned the creek a shade of red. It looked so wonderful that Rusty and Pogo forgot all about the pot of gold. â&amp;#x20AC;&amp;#x153;Perhaps a rainbow is enough of a reward on its own?â&amp;#x20AC;? suggested Pogo. And Rusty, with a mouthful of termites, agreed.

As a child, Steve Parish was fascinated with animals. As an adult, he has devoted his career to photographing them, and through publishing has promoted an informed awareness of Australia’s unique and varied wildlife. With each photograph, Steve aims to capture a little of the character of the animal, giving us a sense of being immersed in the animal’s environment. Steve has a passion for teaching children about nature. What better way is there to develop this appreciation than through the joy of reading? Karin Cox is an editor, poet and author who grew up on a farm in the Sunshine Coast Hinterland — inspiring her love for nature. Graduating with a degree in English Literature &amp; Communication Studies, she first entered publishing as an editor, going on to edit and ghostwrite books in Australia and the UK before publishing her first book in Australia in 2003. She has now written more than fifteen titles for Steve Parish Publishing.

Published by Steve Parish Publishing Pty Ltd PO Box 1058, Archerfield, Queensland 4108 Australia www.steveparish.com.au © copyright Steve Parish Publishing Pty Ltd All rights reserved. No part of this publication may be reproduced, stored in a retrieval system, or transmitted in any form or by any means, electronic, mechanical, photocopying, recording or otherwise, without the prior permission in writing of the publisher. ISBN 978174193632 2 First published 2010. Photography: Steve Parish

Rusty and the Rainbow and other Karin Cox Story Books can be purchased online from our webshop: http://www.steveparish.com.au

Rusty and the Rainbow

Rusty the numbat and his friend Pogo the wallaby chase a rainbow hoping to find a pot of gold at its end. Along the way, the rainbow-coloured animals they meet tell them their adventure is impossible. But is it? Will Rusty and Pogo find treasure at the end of the rainbow? Gorgeous photos of these all-Australian creatures and our beautiful landscapes will delight children and carers alike. The age-appropriate yet honest text will ensure this storybook's status as a firm family favourite. 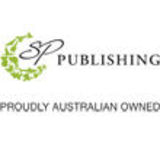