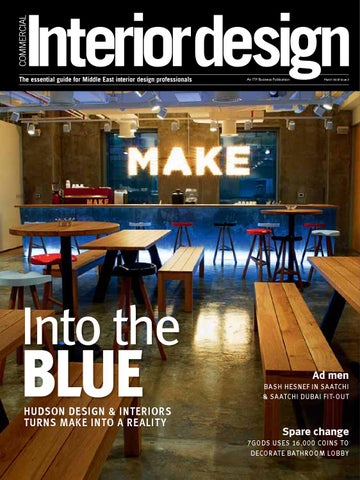 teve Hudson is the product of former British Prime Minister Margaret Thatcher’s YTS (youth training scheme) set up in 1983 as an on-the-job training course for school leavers. He started working for a kitchen company before joining designer Mark Wilkinson, known as the ‘Mozart of Kitchen Cabinet Makers’ and now owns Hudson Design & Interiors (HDI), which carries out project management and interior design services for homes, ofjces, restaurants and corporate jt-outs. He recently collaborated with entrepreneur Leith Matthews and Neotech jt-out company to complete MAKE business hub, located on the jrst koor of Al Fattan Towers, Dubai Marina, a WiFi café for the mobile worker in a cool, inspiring urban space.

Tell me about MAKE business hub? MAKE Business Hub is the brainchild of Leith Matthews. He and his partners approached me last May with their idea of creating a business hub café with a difference. They gave me a brief of their concept, the ethos behind it and what the brand stood for. HDI created 3D images and design samples for the space, including the centre desks and ‘S’ shaped window

seating, and took it from there. Our main stumbling block was the approval process, which was slow and frustrating but it has a unique design of desks and furniture which you can’t jnd elsewhere in Dubai and was designed locally around the client’s brief. Matthews researched his target market – the mobile worker community – before pinning down his design concepts. He wanted the hub to appeal to young entrepreneurs, creative professionals and freelancers who enjoy working outside the traditional SundayThursday, 9am-5pm environment. As visitors enter the space, the café segment is immediately visible, with a six-metre long espresso bar and high stools with red, white and black tops lined up in front. Shelves don’t line the wall behind the bar – everything is stored behind the table – but a large lighting installation is the highlight. Spelled out with lightbulbs is the word “MAKE” to emphasise the branding. It’s a stripped down area, with an industrial feel. Matthews wanted to strip down this area on purpose because he was on a budget and said the exposed cement gave it an urban touch and saves money. The café is similar to something you would jnd in Australia or Europe.

The design works around the structural elements of the space, which, while largely open, features a central pillar. Working as a dividing point between café and workspace, a shelving system was installed around the pillar to double up as a library. Books and magazines related to technology, design and entrepreneurship are stacked here, with soft seating placed on either side. The area facing the full-length glass windows is meant to be the work space. The amoeba-shaped tables, with seating for four, were custom-designed by HDI after Matthews’ research. The design of the table is such that a group of up to four people can work as ‘a microagency’. Each seating section provides enough space for one person, a mouse, laptop, notebooks and storage.

There is a powerpoint per person, a light and a chair ergonomic to the table. A line of two-seater ‘S’-shaped chairs line the windows, where one person faces the other. These pieces were suggested by Matthews and produced locally in Al Quoz. They have small table tops and were created with the idea of sending emails or having a one-to-one conversation. Four meeting pods line the other side of the room. Three of them feature fulllength glass windows, white walls and bench-style seating. The fourth pod has a chalkboard on the wall for conceptual meetings, with geometric-design chairs possessing a cement base. The only structural change which was made to the venue was building a room for the kitchen.

How do you feel about the design? It is very rewarding walking into an empty shell and being asked how we could turn this into MAKE. The ethos is ‘MAKE something for yourself and MAKE it happen’, and this followed through in the design. We were kexible with our ideas, for example, the S-shaped chairs, because we were trying to create something that would work with the shape of the curved room, trying to get as many curves in while balancing the angles of the pods and desks. The ceiling is a masterpiece. We could have had a kat ceiling with spotlights like everywhere else, but we wanted to create an open space so painted it white and off-set this with the red colour of the water sprinklers which rekects the colour of the brand. The emphasis is on the interior, not the ceiling. We put a sealant on the grey concrete pillars to bring out the colour as it plays on the idea of urban chic. The place really comes alive during nighttime when the sunlight plays on the tone of the place and it has a nice contrast against the solid wood kooring. People have tried to achieve this look before here in Dubai while others go for a more traditional look. We wanted to future proof it so that the design is sustainable and will still be relevant in jve to 10 years time. There are also talks about opening more cafes in the area and expanding the brand. We want the business hub café to act as an open house where people

can sit together, network and share ideas or hold meetings here. Everyone is welcome, the diversity of clientele is brilliant and no-one feels alienated. We’ve really hit the mark with the idea of the entrepreneur mobile worker. We’ve kept the windows open without covering them with any blinds or curtains so that the area doesn’t feel too enclosed or like an ofjce. There are advantages to having natural light coming through both the front and back of the venue and the theme can be changed inside with the different zones and dimmable switches. The kitchen is similar to a jve star hotel design and is bigger than it should be. It is jnished in clean white tiles and stainless steel to give it a pristine look. What project are you working on now? We have just jnished a signature showpiece, a cinema and games room in the basement of a residential villa in Al Barari. It is an amazing project that jrst started out as a request for a kitchen revamp, but the client was so pleased with the job, he asked us to redesign the rest of the villa. This included bespoke one-off pieces of furniture, jreplaces, children’s plarooms, an ofjce and study and family room but the ‘piece de resistance’ is the home cinema, which was orginally just a basement. It has taken one year to complete and Yogesh from Neo Audio Visual Solutions carried out the acoustics, AV and projector work.

We are also working on a beauty salon refurbishment in Jumeirah, a jtout for a boutique in JBR and jt-out of a kitchen and bathrooms in a residential villa in the Springs. In other news, we have partnered with Chris Hodge and Trevor Simmonds of recently launched Silence Interiors to expand our network of skilled professionals who can work together to offer clients a more personal service. They bring with them a vast amount of industry knowledge along with a large network of friends and business associates. The aim is to share our resources, to diversify into a number of different avenues and win contracts that allow us to show off our skills as interior designers.

4 The dining area. 5 One of the four pods. 6 Pictures hang on the main pillar.

We don’t tread on each others’ toes, we work to draw all the threads together.

Where do you see HDI in the future? Going forward, we are looking to draw together the best professionals within the UAE and establish a workforce where all the products we use are made in Dubai. It will mean putting an EU and US specijcation to the skillset here, and the problem mainly lies with the middle management but we are going to change that, making it more proactive and engaging. Silence Interiors is destined to become an inclusive resource, offering design and build solutions for the commercial and residential markets. Under the umbrella of Silence, a unique partnership of industry professionals will unfold, encompassing Indoor, Outdoor, Media and beyond.

What advice would you give to someone in this industry? Use your resources and contacts around you to spread the skills expertise. Don’t be afraid to ask for help from your contacts within the industry because everyone is in the same boat. It’s jne to identify your market niche, but you need to think laterally as this

will help you to explore other avenues. When I came to Dubai, I was not thinking of opening an interior design jrm but soon after working on kitchens and bathrooms I started to do more complete jt-out work for companies and individuals. There seems to be a lack of companies offering a complete overall service and this is what we are good at. You have to think outside the box, don’t rule anything out. What’s next for HDI? We have been commissioned to design a new ofjce for a well-known ad agency in Media City, and an indoor childrens’ play area at Dubai Termiinal 3, which will be the jrst of its kind in the GCC. This is an exciting project and, if it comes off, will set the benchmark for similar play areas in the region. We’ve got some exciting projects coming up with Silence, opening a design centre in Tecom and we have been commissioned to do the planning and jt-out of the Healing Zone holistic therapy centre in the new J3 shopping mall in Al Wasl Road, Dubai. HDI is the project manager and Silence will create the concept and design. We will also be doing a new build for a villa in Cape Town, South Africa and a kitchen extension for a registered Tudor House in Norwich, UK. 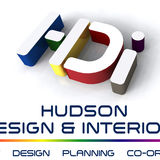 This is the article we did for Interior Design Magazine for the design & fit-out for MAKE Business Hub Café in Jumeirah Beach Residence, Dub...

This is the article we did for Interior Design Magazine for the design & fit-out for MAKE Business Hub Café in Jumeirah Beach Residence, Dub...