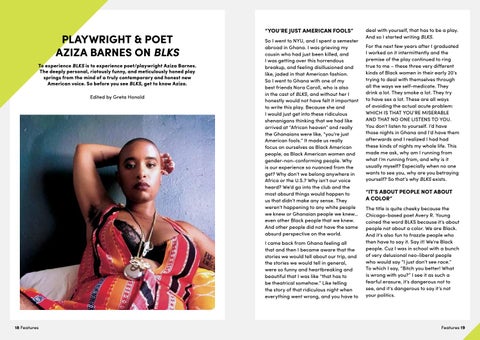 PLAYWRIGHT &amp; POET AZIZA BARNES ON BLKS To experience BLKS is to experience poet/playwright Aziza Barnes. The deeply personal, riotously funny, and meticulously honed play springs from the mind of a truly contemporary and honest new American voice. So before you see BLKS, get to know Aziza. Edited by Greta Honold

“YOU’RE JUST AMERICAN FOOLS” So I went to NYU, and I spent a semester abroad in Ghana. I was grieving my cousin who had just been killed, and I was getting over this horrendous breakup, and feeling disillusioned and like, jaded in that American fashion. So I went to Ghana with one of my best friends Nora Caroll, who is also in the cast of BLKS, and without her I honestly would not have felt it important to write this play. Because she and I would just get into these ridiculous shenanigans thinking that we had like arrived at “African heaven” and really the Ghanaians were like, “you’re just American fools.” It made us really focus on ourselves as Black American people, as Black American women and gender-non-conforming people. Why is our experience so nuanced from the get? Why don’t we belong anywhere in Africa or the U.S.? Why isn’t our voice heard? We’d go into the club and the most absurd things would happen to us that didn’t make any sense. They weren’t happening to any white people we knew or Ghanaian people we knew… even other Black people that we knew. And other people did not have the same absurd perspective on the world. I came back from Ghana feeling all that and then I became aware that the stories we would tell about our trip, and the stories we would tell in general, were so funny and heartbreaking and beautiful that I was like “that has to be theatrical somehow.” Like telling the story of that ridiculous night when everything went wrong, and you have to

deal with yourself, that has to be a play. And so I started writing BLKS. For the next few years after I graduated I worked on it intermittently and the premise of the play continued to ring true to me – these three very different kinds of Black women in their early 20’s trying to deal with themselves through all the ways we self-medicate. They drink a lot. They smoke a lot. They try to have sex a lot. These are all ways of avoiding the actual acute problem: WHICH IS THAT YOU’RE MISERABLE AND THAT NO ONE LISTENS TO YOU. You don’t listen to yourself. I’d have those nights in Ghana and I’d have them afterwards and I realized I had had these kinds of nights my whole life. This made me ask, why am I running from what I’m running from, and why is it usually myself? Especially when no one wants to see you, why are you betraying yourself? So that’s why BLKS exists.

“IT’S ABOUT PEOPLE NOT ABOUT A COLOR” The title is quite cheeky because the Chicago-based poet Avery R. Young coined the word BLKS because it’s about people not about a color. We are Black. And it’s also fun to frazzle people who then have to say it. Say it! We’re Black people. Cuz I was in school with a bunch of very delusional neo-liberal people who would say “I just don’t see race.” To which I say, “Bitch you better! What is wrong with you?” I see it as such a fearful erasure, it’s dangerous not to see, and it’s dangerous to say it’s not your politics. 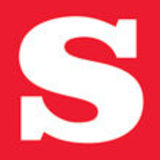