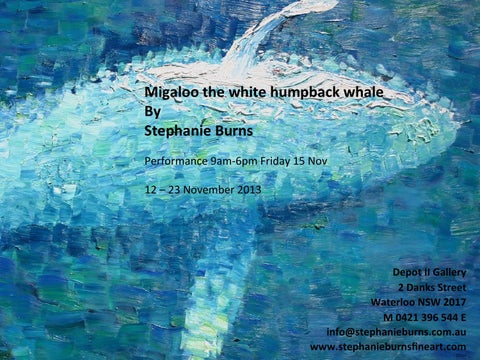 On 28th June 1991, an all-­‐white whale was photographed passing Byron Bay, Australia&#39;s most easterly point. Named Migaloo by the indigenous community in Queensland (&quot;White Fella&quot;), at the Rme the whale was the only documented all-­‐white humpback whale in the world. For me, Migaloo is symbolic of the vulnerability of the humpback populaRon. My current series of painRngs focuses on Migaloo, telling the story of his journey up and down the coast. Migaloo is an awe-­‐inspiring member of his species, unfortunately humpback whales are sRll threatened by humanity&#39;s interference and predaRon. Whale populaRons are aﬀected by ships and scienRﬁc whaling carried out in the southern oceans. Even today, some countries threaten to resume whaling. The TV documentary &quot;Whale Wars&quot; highlighted to me the plight of these amazing creatures. Migaloo stands out in our waters as a beacon of hope for humpback whales, but he also highlights their vulnerability.

The paintings in this exhibition were shown in Sydney in 2013. Migaloo is an exceptional creature and the only white adult male humpback in the world. In her paintings Stephanie uses Migaloo as a metaphor for the plight of our ocean wild life. 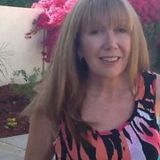