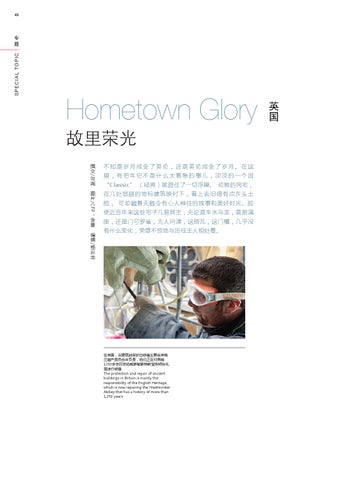 在英国，古建筑的保护与修缮主要由英格 兰遗产委员会来负责，他们正在对具有 1250多年历史的威斯敏斯特教堂牧师会礼 堂进行修缮 The protection and repair of ancient buildings in Britain is mainly the responsibility of the English Heritage, which is now repairing the Westminster Abbey that has a history of more than 1,250 years

Trace of Time Stories about protection of old cities

专题 尽管伦敦很多古老的住宅会进行一些商业 经营，但是屋主人会竭力保持其原有的风 貌不被改变 Many old residences in London are also engaged in business, but their owners try hard to keep their original outlook intact

为了保持老街原有的韵味，伦敦的路牌和 标识也颇具时代特点 To keep the original flavor of old streets, the road signs in London are characteristic of the time

漫步在伦敦的街头或某条小巷，常可以看 到直径约一尺的圆形搪瓷蓝牌，这代表着 这幢老屋曾是某位名人的故居 If you walk on the street or in an alley in London, you can often see round blue enamel boards with the diameter of about one foot, which means some celebrity used to live in this old residence

Hometown Glory Chinese text by Gou Yao Photos by CFP, Quan Jing Chinese text edited by Yang Yunlong 左：伦敦的阿普斯利邸宅，一位工作人员 正在对十九世纪的形吊灯进行清理 Left: in Apsley House in London, a staff member is cleaning a 19th-century chandelier 右：尽管伦敦已经成为繁华的商业都市， 但是对于老街、老宅的保护却不遗余力， 随处可见、保存完好的古建筑让伦敦增色 不少 Right: although London is a bustling commercial metropolis, it spares no effort in protecting the old streets and residences. The well-preserved ancient buildings that can be seen everywhere add much to London’s glamor

When you walk on the street or an alley in London, you often see a round blue enamel board with the diameter of about one foot. On the board is the name and date of birth of the celebrity that used to live in the house for a certain period. There are sometimes eight boards hanging on a house. Most of those people are writers, but there are also thinkers, scientists, artists, economists and a couple of politicians. Since the first blue board was hung on the old residence of the poet Byron in 1867, the certification of such old houses has been the responsibility of a specific “blue board committee”. The sponsors have changed several times, and now the English Heritage is in charge.

There are altogether more than 800

up for the losses caused by natural

blue boards in the Greater London,

but the old houses with such blue

over the past 100 years. Since its

boards are not among the numerous

foundation, this organization has

museums of various sizes in the city

spent more than 10 million pounds on

as people still live in them. The only

heritage protection, while 70% of its

difference is that the brick walls where

income comes from an appropriation

the blue boards are embedded shall

from taxpayers’ money and 30% is

be properly protected and regularly

raised by itself or donated.

repaired, so that later generations can

I was sitting in a café on the Oxford

commemorate them. Those 800-plus

Street on a Christmas Eve, watching

names, in their respective times and

people on the street through the

fields, quietly enrich the history of this

window. Adele was singing in her

magnetic voice. “Shows that we ain&#39;t

those celebrities themselves back in

gonna stand shit. Shows that we are

The official English Heritage was

united”. “Round my hometown, Ooh

the people I&#39;ve met are the wonders

of Heritage Protection issued in 1980

of my world”. The song was called

and allocates funds for systematic

Hometown Glory, and I thought it

answered all my questions.

repair and protection, so as to make