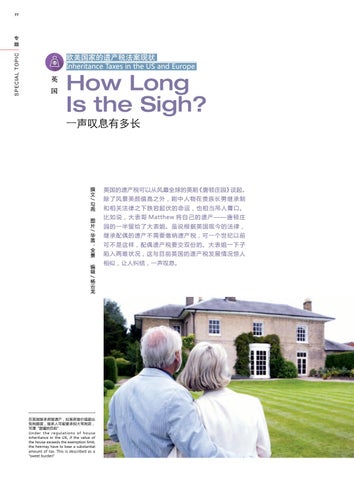 欧美国家的遗产税法案现状 Inheritance Taxes in the US and Europe

How Long Is the Sigh? 一声叹息有多长

华 / 盖、全景 编辑 杨 / 云龙 在英国继承房屋遗产，如果房屋价值超出 免税额度，继承人可能要承担大笔税款， 可谓“甜蜜的负担” U n d e r t h e r e g u l a t i o n s of h o u s e inheritance in the UK, if the value of the house exceeds the exemption limit, the heirmay have to bear a substantial amount of tax. This is described as a &quot;sweet burden&quot;

上：为了规避遗产税，一些老人选择将手 中的存款赠与子女或者孙辈 Top: In order to avoid inheritance tax, some old people choose to donate their deposits to their children or grandchildren 下：最近伦敦的房屋价格猛涨，遗产税覆 盖了大多数的中产阶级，已经违背了遗产 税应该针对少数暴富者的初衷 Bottom: Recently, the house price in London has soared. As a result, the inheritance tax now applies to most of the middle class. This is contrary to the original intention of the inheritance tax which was established targeting the few upstarts

How Long Is the Sigh? To date, the inheritance tax in the UK is still a political controversy. In 1986, the Thatcher government reformed inheritance tax and offered a lot of tax deduction items. But this has been criticized by leftists for sheltering the wealthy. In 2007, Chancellor of the Chinese text by Gou Yao Photos by Getty and Quan Jing Chinese text edited by Yang Yunlong

Exchequer Gordon Brown of the

和美国富豪的裸捐相比，英国人在遗产分 配上更有家庭观念，以子女和亲属为先， 通过成立信托基金等方式，传递财富 Compared with American tycoons who like to donate everything, British people value families the most in heritage allocation. They will give priority totheir children and relatives and through the establishment of a trust fund to pass the wealth

ruling Labor Party presided over the reform. The past practice of increasing the threshold caused by inflation was removed. And the threshold is fixed at £325,000 for individuals. The Conservatives think the threshold should be £1 million for individuals, a view held by the current Prime Minister David Cameron and Chancellor of the Exchequer Osborne. But under financial pressure, and in order to reach a deal with the Liberal Democratic Party, Britain implemented the inheritance

the Conservative government had to

tax very early in Europe. From its birth

200 years of history. Part of the reason

This can maintain the government

is that the French Revolution of 1789

revenue to cope with pressure on

triggered the dual stimulation: on the

pensions brought about by the aging

one hand, the war against the Napoleon

Besides all political factors, the question

expenses and there was a dire need for

for inheritance tax is that people use

the increase of revenue; on the other

their own income to buy houses and

hand, thoughts of liberty, equality and

other property and tax has already

fraternity from the French Revolution also

been collected from the income. The

inheritance tax is a double taxation at

death. Even the former Labour Transport

of inheritance will lead to a vicious circle

of &quot;the rich get richer, and the poor get

of inheritance tax as it is &quot;punishment

poorer&quot; and rich inheritance must be

for hard work, prosperity and enterprise&quot;