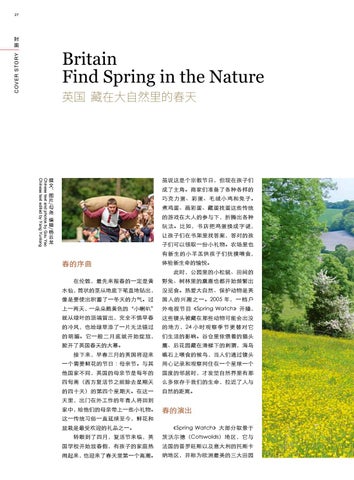 Britain Find Spring in the Nature

fourth Sunday of Lent that starts 40

days minus Sundays before the Eas-

Protecting animals has been one of

their engagements. In 2005, outdoor

ing outside will come back home and

bring small gifts to their mothers. The

Cameras were hidded where animals

tradition has been maintained nowa-

roamed around 24 hours to study

days, with flowers and potted plants

how the change of season influenced

being the most popular gifts.

their lives. There were owls cuddling

April arrives in a blink of eyes.

In London, daffodils send the

In the Easter, schools are on spring

break and families with kids become

their nestlings on rocks by the sea.

lively. This is the first height of the

By closely following our “neighbours”

joyful season. Starting as a religious

on the same planet, we found that

festival, the Easter now focuses on

there were so many creatures that

depended on us. The show brought

ucts such as chocolate eggs, colour-

us closer to the nature.

first signal of spring. They bloom at

and bunnies. The adults will help boil

the end of February, drawing up the

and paint eggs, then hide them away

curtain of a new spring. In early spring

for children to search. These games

are never dull for children.

mand for flowers as the Mother’s Day

in the barn, hedgehogs sneaking un-

At this time, little squirrels in the

draws near. Unlike in other countries,

park, bunnies in the field, and moose

the Mother’s Day in Britain falls on the

in the forests frequently go out for