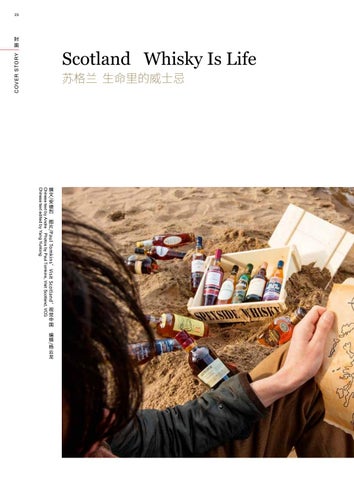 苏格兰威士忌有五大 产区，每个产区的酒 都别具特色 There are five brewing districts for Scotch whisky, each one has its own distinctive characteristics

上：威士忌的年份计 算与葡萄酒不同，指 的是酒存在木桶里的 年份，只要装瓶就不 再计年 Top: The age calculation of whisky is different from that of wine, it refers to the time stored in barrel. It&#39;s not calculated by year once put into bottles 下：一杯好酒的诞生 总是伴随着一段吸引 人的故事 Bottom: A good glass of wine usually comes with a fascinating story

上：爱丁堡有著名的 威士忌体验中心，可 以了解威士忌的前世 今生 Top: There is famous Scotch Whisky Experience in Edinburgh, in which people can get to know the past and present of whisky 中：感受苏格兰生命 之水渗透进身体的味 道，为灵魂寻找最好 的栖身之所 Middle: Experience Scotland’s “water of life” as it courses through the body and find the best shelter for soul 下：苏格兰威士忌有 五百多年的历史，形 成了自己独特的文化 Bottom: There are over five hundred years of Scottish whisky history, which formed its unique culture

burgh castle is the best choice to get to know whisky. Its design is so much like the rides in Disneyland. Take a small cart shaped like a beer barrel and visit all kinds of situational simulations of whisky production along the track. For example, the fermenting room is filled with ball decorations, which are fashionable and vivid in their design. The tourist becomes like a grain of wheat, experiencing the For Scots, whisky embodies a

There are whisky festivals all

national sprit that runs through their

over Scotland every year: Highland

veins. Scotland has over 500-years

in April, Speyside at the beginning of

of brewing history. For them, Scot-

May, Isle of Islay and Edinburgh at

land is the origin of whisky, and they

the beginning of June, and Glasgow

insist that the word must be spelled

in November. Lots of well-known

breweries will be open to the public,

sultant Charles MacLean is a world

spelled by the Irish, who also think of

where people can visit and taste the

themselves as the home of the spirit.

says that when you buy whisky, it’s

Although there is no way to confirm

There are also some breweries

There is an English movie called

not just a purchase of wine, it’s a pur-

its origin or the spelling, Scottish and

open all year round, most of them

chase of culture, a piece of history, a

Irish both admit that the name of this

are along popular tourist routes. For

piece of art and tradition.

distilled spirit comes from Gaelic “the

Distillery. It used to be the flourishing

for travel, definitely come to the bar,

in Latin). It is certain that when the

Queen’s Dock in the Victorian era. It

raise the traditional Quaic cup and

witnessed the glory of Glasgow as

Ocean, one sip of spirits will warm

the “second largest imperial city” and

the its decline as “the largest ship

perience the Scotland “water of life”

manufacturing base”. The Scotch

coursing through your body and find

coming back to life.

Whisky Experience in front of Edin-

for best shelter for your soul.

So when you come to Scotland