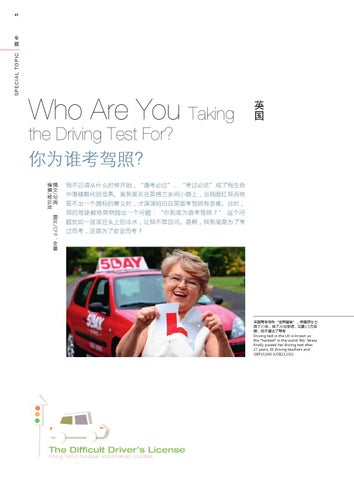 Who Are You Taking the

In the UK, to get a driving license

you must take a test comprised of theory knowledge and road skills. The theory test is divided into a multiple choice section and hazard awareness

badge in red on a white background.

test is simple and intuitive. 14 video

professional examinations. There are

clips will be played and the perspective

is a simulation of you driving a car.

based on their skill levels.

A total of 15 potential dangers are

distributed in these short films. The

known as the road test) is the most

sooner the response, the higher the

difficult one. Different test centers have

scores will be and vice versa. If you

different pass rates and the lowest

ignore all these dangers, you will get

is less than 30 percent. According

zero points for this test.

to statistics, the overall pass rate in

In Britain, you have to hit the road

in your very first class. If you have a

Provisional Driving License from the

determines the result of the test. This

of UK, you can drive so long as your

but also meant to be fair. The focus

passenger has more than three years

of the examiner is the driver’s safety

of driving experience and your car

awareness. Simply put, the driver has

prominently sports an L for learner

to make people around feel safe.