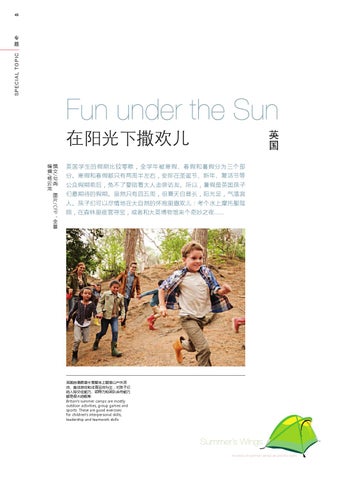 Summer’s Wings A review of summer camps around the world

右：暑假里，英国老人有时会把孙辈们接 到家里小住几日，教会他们一些生活技能 Right: Senior British will take their grandsons home for some days in summer in order to teach them life skills

伦敦科学博物馆内，一群参加夏令营的孩 子们正在与机器人玩耍 In the Science Museum in London, a group of child campers are playing with the robot

Summer camp in Britain has always been the top choice for parents because it is flexible - ranging from one day to several weeks, and comprehensive, including football, rowing, painting, musical instrument, stagecraft and equestrianism. Perhaps to make the best use of rare sunshine in Britain, summer camps here are almost all focused on outdoor activities, group games and sports, which is very helpful for improving children’s capability of interpersonal communication, leadership and teamwork. 大英博物馆和科技博物馆会定期组织一些 博物馆之夜的主题活动，这也是孩子们暑 假夏令营的好去处 The British Museum and the Science Museum will organize night activities on a regular basis. These activities are good places for children in the summer camp

The price for British summer camp

varies from tens of pounds to over

and schools today cram too many

100 per day, which is acceptable for

most families, and it is usually hosted

in local schools, so parents can send

sometimes talks about her summer

and pick up their children. For some

vacation when she was little. “I would

older children, parents hope they can

cake at home with my mom, and do

activities organized by the scouts is

housework with my brother and sister.”

one of the best ways to do that.

In her opinion, for the new generation that is born in the high-tech era and

brought up surrounded by money,

and children in such camps do

they not only need sunshine when

everything by themselves, including tent pitching. Waiting for meals to be served is out of the question because scout camp is usually carried

growing up, but also wind and

out in remote forests, so children have to learn to work with others to cook and clean the dishes. Outdoor survival isn’t as boring and hard as some imagine. On the contrary, children often have such a good time in scout camp that they don’t want to go home. Organizers also carefully arrange many games for the children, including cooking contest, campfire party, grassland cycling contest, horse riding, water skiing, and crab fishing. Although summer camps in Britain have been continuously improved,

英国有水上童军活动，适龄的孩子可以参 加航海活动，通过考试还能获得航海资格 证书 Britain also has water scouts. Children who reach the age requirement can participate in sailing activities and those who pass the exams can get sailing qualifications