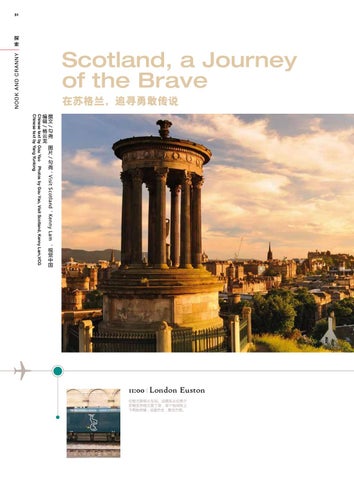 Scotland, a Journey of the Brave 在苏格兰，追寻勇敢传说

探索 海岸旁的邓诺特城堡， 孤独地注视着海面 Standing on the coast, the Dunnottar Castle looks like a longly watcher of the sea

探索 高地运动会上的精彩瞬间 Highlights of the Highland Game and Gathering

When we were about to arrive

The east and south parts of

they registered early enough that

Scotland have flat terrain, while its

day. Near the playing fields are food

on our berth compartment as a

west and north are made of an-

quiet in the morning, with few

these parts, together with the is-

people on the streets. Only the

lands in the west, are called “the

mer Throwing. For children, there is

colorful posters for the upcoming

highland”. The Highland Game and

a jumping castle and carousel.

Edinburgh Art Festival could give

Gathering takes place every July or

The Highland Game and Gath-

us a trace of its vibrancy. We took a

August in Scotland. To put it anoth-

ering is a non-profit community gath-

stroll along the streets until opening

er way, the games are a little like the

ering. Ticket fees and other revenues

time at the car rental. After com-

are donated to Scottish soldiers

pleting the rental procedure, we

for brave and strong men. The

and their families. The Scottish are

drove north. My daughter is an en-

grounds were a park, with a small

said to be brave and courageous. In

thusiast for the Pixar movie Brave,

Brave, sons of the lords competed

which is set in Scotland, and never

with each other for Merida’s hand

tires of it. Our trip today was to visit

for junior students than anything.

in marriage. However, the princess

places where Princess Merida, the

But the modest surroundings belie

beat all the competitors in archery,

movie’s main character, goes in the

the truth — the games are Hercu-

gaining freedom from her arranged

courtship. During the games, I saw

ing with a four-year-old. We tried

rocks, and weights and tug-of-war.

our best to have a rest every two

All are welcome to take part in the

hours and to visit some other spots

the youth. I couldn’t help but admire

at the same time.

to attend some events, as long as