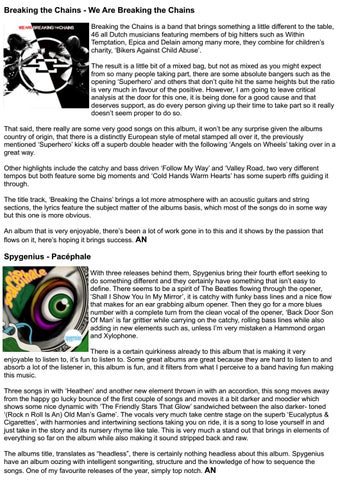 Breaking the Chains - We Are Breaking the Chains Breaking the Chains is a band that brings something a little different to the table, 46 all Dutch musicians featuring members of big hitters such as Within Temptation, Epica and Delain among many more, they combine for children’s charity, ‘Bikers Against Child Abuse’. The result is a little bit of a mixed bag, but not as mixed as you might expect from so many people taking part, there are some absolute bangers such as the opening ‘Superhero’ and others that don’t quite hit the same heights but the ratio is very much in favour of the positive. However, I am going to leave critical analysis at the door for this one, it is being done for a good cause and that deserves support, as do every person giving up their time to take part so it really doesn’t seem proper to do so. That said, there really are some very good songs on this album, it won’t be any surprise given the albums country of origin, that there is a distinctly European style of metal stamped all over it, the previously mentioned ‘Superhero’ kicks off a superb double header with the following ‘Angels on Wheels’ taking over in a great way. Other highlights include the catchy and bass driven ‘Follow My Way’ and ‘Valley Road, two very different tempos but both feature some big moments and ‘Cold Hands Warm Hearts’ has some superb riffs guiding it through. The title track, ‘Breaking the Chains’ brings a lot more atmosphere with an acoustic guitars and string sections, the lyrics feature the subject matter of the albums basis, which most of the songs do in some way but this one is more obvious. An album that is very enjoyable, there’s been a lot of work gone in to this and it shows by the passion that flows on it, here’s hoping it brings success. AN

Spygenius - Pacéphale With three releases behind them, Spygenius bring their fourth effort seeking to do something different and they certainly have something that isn’t easy to define. There seems to be a spirit of The Beatles flowing through the opener, ‘Shall I Show You In My Mirror’, it is catchy with funky bass lines and a nice flow that makes for an ear grabbing album opener. Then they go for a more blues number with a complete turn from the clean vocal of the opener, ‘Back Door Son Of Man’ is far grittier while carrying on the catchy, rolling bass lines while also adding in new elements such as, unless I’m very mistaken a Hammond organ and Xylophone. There is a certain quirkiness already to this album that is making it very enjoyable to listen to, it’s fun to listen to. Some great albums are great because they are hard to listen to and absorb a lot of the listener in, this album is fun, and it filters from what I perceive to a band having fun making this music. Three songs in with ‘Heathen’ and another new element thrown in with an accordion, this song moves away from the happy go lucky bounce of the first couple of songs and moves it a bit darker and moodier which shows some nice dynamic with ‘The Friendly Stars That Glow’ sandwiched between the also darker- toned ‘(Rock n Roll Is An) Old Man’s Game’. The vocals very much take centre stage on the superb ‘Eucalyptus & Cigarettes’, with harmonies and intertwining sections taking you on ride, it is a song to lose yourself in and just take in the story and its nursery rhyme like tale. This is very much a stand out that brings in elements of everything so far on the album while also making it sound stripped back and raw. The albums title, translates as “headless”, there is certainly nothing headless about this album. Spygenius have an album oozing with intelligent songwriting, structure and the knowledge of how to sequence the songs. One of my favourite releases of the year, simply top notch. AN