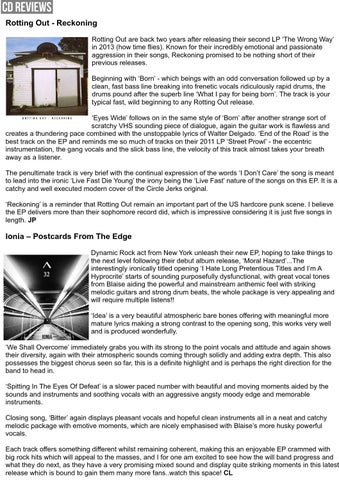 Rotting Out - Reckoning Rotting Out are back two years after releasing their second LP ‘The Wrong Way’ in 2013 (how time flies). Known for their incredibly emotional and passionate aggression in their songs, Reckoning promised to be nothing short of their previous releases. Beginning with ‘Born’ - which beings with an odd conversation followed up by a clean, fast bass line breaking into frenetic vocals ridiculously rapid drums, the drums pound after the superb line ‘What I pay for being born’. The track is your typical fast, wild beginning to any Rotting Out release. ‘Eyes Wide’ follows on in the same style of ‘Born’ after another strange sort of scratchy VHS sounding piece of dialogue, again the guitar work is flawless and creates a thundering pace combined with the unstoppable lyrics of Walter Delgado. ‘End of the Road’ is the best track on the EP and reminds me so much of tracks on their 2011 LP ‘Street Prowl’ - the eccentric instrumentation, the gang vocals and the slick bass line, the velocity of this track almost takes your breath away as a listener. The penultimate track is very brief with the continual expression of the words ‘I Don’t Care’ the song is meant to lead into the ironic ‘Live Fast Die Young’ the irony being the ‘Live Fast’ nature of the songs on this EP. It is a catchy and well executed modern cover of the Circle Jerks original. ‘Reckoning’ is a reminder that Rotting Out remain an important part of the US hardcore punk scene. I believe the EP delivers more than their sophomore record did, which is impressive considering it is just five songs in length. JP

Ionia – Postcards From The Edge Dynamic Rock act from New York unleash their new EP, hoping to take things to the next level following their debut album release, ‘Moral Hazard’...The interestingly ironically titled opening ‘I Hate Long Pretentious Titles and I’m A Hyprocrite’ starts of sounding purposefully dysfunctional, with great vocal tones from Blaise aiding the powerful and mainstream anthemic feel with striking melodic guitars and strong drum beats, the whole package is very appealing and will require multiple listens!! ‘Idea’ is a very beautiful atmospheric bare bones offering with meaningful more mature lyrics making a strong contrast to the opening song, this works very well and is produced wonderfully. ‘We Shall Overcome’ immediately grabs you with its strong to the point vocals and attitude and again shows their diversity, again with their atmospheric sounds coming through solidly and adding extra depth. This also possesses the biggest chorus seen so far, this is a definite highlight and is perhaps the right direction for the band to head in. ‘Spitting In The Eyes Of Defeat’ is a slower paced number with beautiful and moving moments aided by the sounds and instruments and soothing vocals with an aggressive angsty moody edge and memorable instruments. Closing song, ‘Bitter’ again displays pleasant vocals and hopeful clean instruments all in a neat and catchy melodic package with emotive moments, which are nicely emphasised with Blaise’s more husky powerful vocals.

Each track offers something different whilst remaining coherent, making this an enjoyable EP crammed with big rock hits which will appeal to the masses, and I for one am excited to see how the will band progress and what they do next, as they have a very promising mixed sound and display quite striking moments in this latest release which is bound to gain them many more fans..watch this space! CL 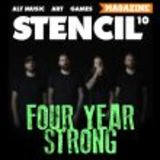