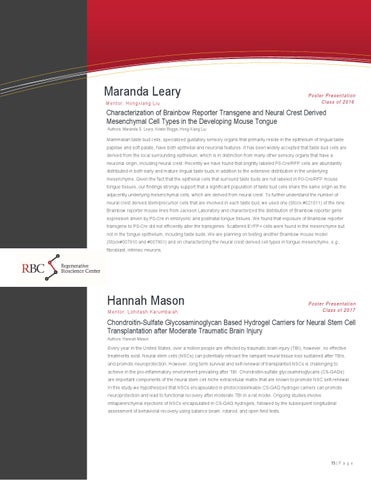 Mammalian taste bud cells, specialized gustatory sensory organs that primarily reside in the epithelium of lingual taste papillae and soft palate, have both epithelial and neuronal features. It has been widely accepted that taste bud cells are derived from the local surrounding epithelium, which is in distinction from many other sensory organs that have a neuronal origin, including neural crest. Recently we have found that brightly labeled P0-Cre/RFP cells are abundantly distributed in both early and mature lingual taste buds in addition to the extensive distribution in the underlying mesenchyme. Given the fact that the epithelial cells that surround taste buds are not labeled in P0-Cre/RFP mouse tongue tissues, our findings strongly support that a significant population of taste bud cells share the same origin as the adjacently underlying mesenchymal cells, which are derived from neural crest. To further understand the number of neural crest derived stem/precursor cells that are involved in each taste bud, we used one (Stock #021011) of the nine Brainbow reporter mouse lines from Jackson Laboratory and characterized the distribution of Brainbow reporter gene expression driven by P0-Cre in embryonic and postnatal tongue tissues. We found that exposure of Brainbow reporter transgene to P0-Cre did not efficiently alter the transgenes. Scattered EYFP+ cells were found in the mesenchyme but not in the tongue epithelium, including taste buds. We are planning on testing another Brainbow mouse model (Stock#007910 and #007901) and on characterizing the neural crest derived cell types in tongue mesenchyme, e.g., fibroblast, intrinsic neurons.

Every year in the United States, over a million people are effected by traumatic brain injury (TBI), however, no effective treatments exist. Neural stem cells (NSCs) can potentially retroact the rampant neural tissue loss sustained after TBIs, and promote neuroprotection. However, long term survival and self-renewal of transplanted NSCs is challenging to achieve in the pro-inflammatory environment prevailing after TBI. Chondroitin-sulfate glycosaminoglycans (CS-GAGs) are important components of the neural stem cell niche extracellular matrix that are known to promote NSC self-renewal. In this study we hypothesized that NSCs encapsulated in photocrosslinkable CS-GAG hydrogel carriers can promote neuroprotection and lead to functional recovery after moderate TBI in a rat model. Ongoing studies involve intraparenchymal injections of NSCs encapsulated in CS-GAG hydrogels, followed by the subsequent longitudinal assessment of behavioral recovery using balance beam, rotarod, and open field tests.