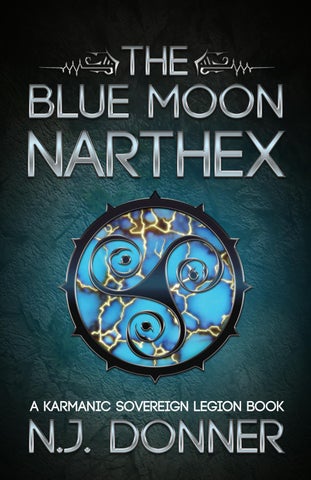 THE BLUE MOON NARTHEX ÂŠ2017 Steel Page Press, LLC. All rights reserved. No part of this book may be used or reproduced by any means, graphic, electronic or mechanical, including photocopying, recording, taping or by any information storage retrieval system without the written permission of the publisher except in the case of brief quotations embodied in critical articles and reviews. This is a work of fiction. Any real-life similarities to charactersâ&#x20AC;&#x2122; names or likenesses, scenes, or plot lines is purely coincidental. Steel Page Press, LLC books may be ordered from your favorite bookseller. www.KSLSeries.com Steel Page Press, LLC 13518 L. Street Omaha, NE 68137 ISBN: 978-0-9974763-1-6 (Ppk) ISBN: 978-0-9974763-2-3 (Mobi) ISBN: 978-0-9974763-3-0 (EPUB) ISBN: 978-0-9974763-4-7 (Audio) Library of Congress Cataloging Number: 2016915752 Library of Congress Cataloging-in-Publication data on file with the publisher. PRODUCTION, DISTRIBUTION AND MARKETING: Concierge Marketing Inc. www.ConciergeMarketing.com Printed in the USA 10 9 8 7 6 5 4 3 2 1

Karmanic Sovereign Legion Karmanic The power of the worldâ&#x20AC;&#x2122;s Karmanic matter will be our guide. Let us only assist the good and fight the urge to sympathize with the bad. We shall not use this great power for our own selfish purpose but for the greater good of all. Sovereign Not governed by borders or governments of mankind, we are free from influence that may pull us from our mission. We are free from the judgements of anyone based on age, gender, race or religion, as Karma does not see these attributes, but only oneâ&#x20AC;&#x2122;s actions. Legion A group that cannot be divided and will not serve one but is a servant of all. We are bound together with the common goal of balancing the good and bad actions of the world.

2 Inside, the man tugged off his handkerchief. Norm. “What were you doing out there?” Norm demanded. “I was waiting for—” Cole stopped. His sweaty skin went cold. His dad was on that train. Thick silence hung between them. Norm looked away and kicked at the ground. Cole waited for Norm to say anything—that his dad hadn’t been on that train or that he had been, but he’d made it out alive. That he’d just seen his dad himself. That they’d been searching for him together. Instead, Norm lowered his head and sighed. “Well, at least I found you.” He said the wrong thing.

“We have to find my dad!” Cole shouted, running toward the door. Norm grabbed him by the collar of his shirt and hauled him back. “Cole! You can’t go out there!” Cole twisted, trying to wrench free. “Listen,” Norm said. “I know a few things about your dad. He misses this train often. I haven’t seen or heard any sign of him. So maybe he wasn’t on it.” Cole drew a ragged breath. “Diesel,” Norm said to the dog just as seriously as if he were speaking to a human, “You look after Cole, all right?” And then to Cole, “Stay here.” Tugging the handkerchief up over his nose, he headed out the door back into the smoke and dust. Cole sunk to the floor and reached for Diesel, burying his face in his fur. The Labrador gave a low-pitched whine. He waited, trying to both block out and make sense of the chaotic sounds beyond that door and listening for the sound of Norm’s step—or better yet, his father’s voice. After what seemed like an hour—but might have only been fifteen minutes—Cole wiped his eyes and lifted his head, looking around him. The room around them was small and cozy. A dog bed lay in front of the wood-burning stove in the corner.

This must be Norm’s place. The walls were cluttered with newspaper and magazine clippings. They seemed to cover most of the room. His curiosity muffled the noises coming from outside. Diesel gave Cole a nudge to indicate he was still there. “Hold on, boy.” Cole got to his feet, moved toward the closest wall, and tilted his head to read a few of the headlines. All of the articles seemed to be about the workers’ revolution, dating back years: March 4, 1906, January 11, 1910…April 21, 1918—only a few months ago. “Norm supported the Workers’ Rights Movement?” Cole whispered. Cole couldn’t help but wonder if Norm wasn’t as good of a friend to his dad as he’d seemed. Cole looked to Diesel. “But he and Dad are such good friends…right?” He squatted down to read one of the yellowing articles. Just then, the door flew open. “Norm?” Cole swung around. It wasn’t Norm. “Phyllis?” he said puzzled. Cole’s stepmother, Phyllis, burst into the room. She was a kind, average-looking woman with long, sandy brown hair and a fair complexion. Her beautiful clothes were a mess of soot and ash.

“Cole!” She ran to him, wrapped him tight in her arms, and then held him away so she could look at him. “Are you all right? Are you hurt?” Cole blinked at her, confused. The last time he had seen her, she was leaving for New York. She rang him to say she made it there, just before he left for the depot that morning. What is she doing here…now? With a deep sigh, she gave Diesel a quick scratch between the ears. “Good boy. Thank you for keeping him safe.” “We don’t know for sure if your dad was on that train,” Phyllis said, her voice wavering. “You know he gets distracted and misses them all the time.” “But…you were in New York.” Cole couldn’t make sense of what was happening. “Oh,” Phyllis replied, seemingly caught off guard by the comment. She wiped a tear from her eye. “We all seem to be where we need to be when things like this happen.” The door opened, letting in a cloud of smoke. “Dad!” Cole shouted. But it was Norm who stumbled in, hacking and coughing. Sounds of sirens, firemen’s voices, and roaring fires poured into the room with him. Norm stopped short, seeming startled to see Phyllis.

“Ah. Thank you for coming so quickly,” Norm said to Phyllis. Awkward silence hung in the air. “I thought Richard told you Miss Carver and I were coming back early,” Phyllis said, a little too carefully. “We arrived in Harrisburg on the 2:45 stop and drove the rest of way.” Her comment stalled the conversation as they seemed unsure of what to say. “I see,” Norm said slowly, before seeming to remember Cole. Cole’s eyes shifted curiously between them. “Anyways, the good news is I’ve found items from Richard’s car, but nothing he kept with him and no sign of him. Let’s hope that he missed his departure again.” “Oh, thank goodness,” Phyllis exhaled. “So he’s safe?” Cole said as Phyllis clutched him. “As far as we know. I will personally contact you as soon as I hear anything,” Norm said. “For now, you best get home.” “Thank you, Norm,” Phyllis said. She then gave Cole a look that indicated it was his turn. “Thank you…for saving me, Norm,” Cole said bashfully.

“Just glad I could help.” Norm began to pack a pipe. “I’m sure he will contact you soon.” Phyllis stepped toward the door with Cole. “Ready? Cover your mouth. The car is near.”

A Home wasn’t far. When they arrived at the McCarthy mansion, Cole refused to go upstairs, even to wash away the soot, choosing to wait with Phyllis and their longtime housekeeper, Agnes, in the drawing room by the phone. Nearly two hours later, it finally rang. Phyllis jumped to answer. “Richard! Oh… Hello, Norm.” Cole straightened. A long pause. “You found it?” Phyllis whispered. The phone fell from her hand. An instant later, she collapsed to the floor, sobbing. No. Dad wasn’t coming home.

"An incredible adventure. I love this amazing new world! Donner is a master of imagination. Call me a fan—I can't wait to see what happens next." —Tosca Lee, NYT Bestselling author

The balance of good and evil has been left in the hands of a thirteen year old... Since the beginning of time, Karmanic matter worked silently and unassisted keeping good and evil in balance, until growing greed in the world meant Karma couldn’t keep up. As World War I rages, the secret Karmanic Sovereign Legion works behind the scenes to help Karma. A suspicious train accident and an odd stone-shaped object that belonged to his father thrust Cole McCarthy and two schoolmates into the middle of this battle to keep dark forces in check. With only the powerful stone, a letter, and grandfatherly Norm to guide them, the trio must unravel clues and tap into unknown strengths to discover who Cole’s father really was and keep themselves and those they love safe.

Includes an excerpt of book 2 in the Karmanic Sovereign Legion series! 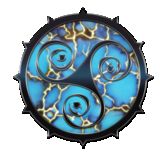