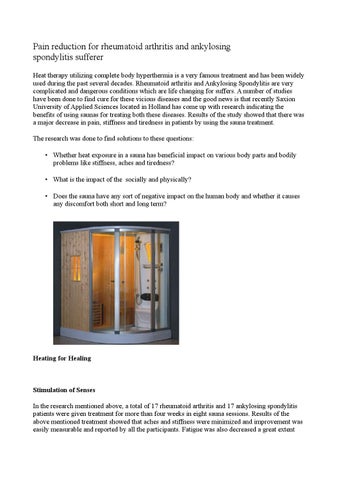 Pain reduction for rheumatoid arthritis and ankylosing spondylitis sufferer Heat therapy utilizing complete body hyperthermia is a very famous treatment and has been widely used during the past several decades. Rheumatoid arthritis and Ankylosing Spondylitis are very complicated and dangerous conditions which are life changing for suffers. A number of studies have been done to find cure for these vicious diseases and the good news is that recently Saxion University of Applied Sciences located in Holland has come up with research indicating the benefits of using saunas for treating both these diseases. Results of the study showed that there was a major decrease in pain, stiffness and tiredness in patients by using the sauna treatment. The research was done to find solutions to these questions: â&#x20AC;˘ Whether heat exposure in a sauna has beneficial impact on various body parts and bodily problems like stiffness, aches and tiredness? â&#x20AC;˘ What is the impact of the socially and physically? â&#x20AC;˘ Does the sauna have any sort of negative impact on the human body and whether it causes any discomfort both short and long term?

Stimulation of Senses In the research mentioned above, a total of 17 rheumatoid arthritis and 17 ankylosing spondylitis patients were given treatment for more than four weeks in eight sauna sessions. Results of the above mentioned treatment showed that aches and stiffness were minimized and improvement was easily measurable and reported by all the participants. Fatigue was also decreased a great extent

during the whole treatment.

The important thing is that no negative impact of the treatment was found and that no negative changes in disease’s activity were seen. The results showed that both aches and stiffness were decreased to a measured level and the disease itself didn’t become worse. Both rheumatoid arthritis and ankylosing spondylitis patients felt comfortable after being treated, Fifty nine percent were reported as feeling comfortable and twenty nine percent of the patients were feeling very comfortable after the treatment. Research Results The research showed that both ankylosing spondylitis and rheumatoid arthritis patients that had been given treatment by sauna showed sufficient improvements on a short term basis and showed clinically relevant beneficial effects during the research. The treatment and research also showed the patients didn’t have any bad or negative long term issues with this treatment and that the patients also exercised good tolerance to the treatment with no discomfort. Major things to be noted in the study include that the sauna gave compact to the patient and brought the patient’s body to complete body hypothermia. Both rheumatoid arthritis and ankylosing spondylitis patients enjoyed the experience; they felt less pain and better physical movements during the treatment. Inflammation was also not seen during the treatment. Another positive impact was that patients lost 0.1 to 0.4 kilograms during treatment. Overall blood pressure was also decreased and this was probably due to the heat treatment. Ankylosing Spondylitis It is a disease that causes inflammation, and also fuses spinal bones with each other. Around one out of every thousand people in the United Kingdom are suffering from this disease. Rheumatoid Arthritis It is an autoimmune disease that causes inflammation in joints, and it also causes damage to tissues. The disease is a lot more common in women as compared to men. Around 0.8 percent of United Kingdom’s total population have been affected by this disease.

For more articles and information on steam showers visit www.steamandshoweruk.co.uk Heat therapy utilizing complete body hyperthermia is a very famous treatment and has been widely used during the past several decades. Rheum...

Heat therapy utilizing complete body hyperthermia is a very famous treatment and has been widely used during the past several decades. Rheum...