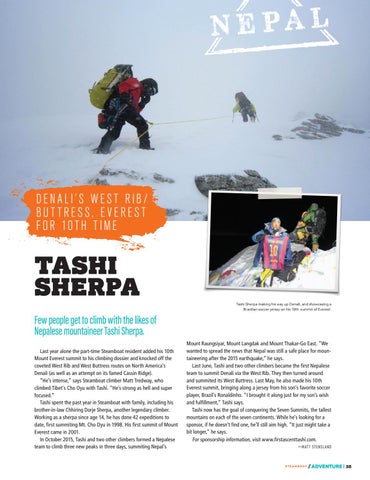 TASHI SHERPA Tashi Sherpa making his way up Denali, and showcasing a Brazilian soccer jersey on his 10th summit of Everest.

Few people get to climb with the likes of Nepalese mountaineer Tashi Sherpa. Last year alone the part-time Steamboat resident added his 10th Mount Everest summit to his climbing dossier and knocked off the coveted West Rib and West Buttress routes on North America’s Denali (as well as an attempt on its famed Cassin Ridge). “He’s intense,” says Steamboat climber Matt Tredway, who climbed Tibet’s Cho Oyu with Tashi. “He’s strong as hell and super focused.” Tashi spent the past year in Steamboat with family, including his brother-in-law Chhiring Dorje Sherpa, another legendary climber. Working as a sherpa since age 14, he has done 42 expeditions to date, first summiting Mt. Cho Oyu in 1998. His first summit of Mount Everest came in 2001. In October 2015, Tashi and two other climbers formed a Nepalese team to climb three new peaks in three days, summiting Nepal’s

Mount Raungsiyar, Mount Langdak and Mount Thakar-Go East. “We wanted to spread the news that Nepal was still a safe place for mountaineering after the 2015 earthquake,” he says. Last June, Tashi and two other climbers became the first Nepalese team to summit Denali via the West Rib. They then turned around and summited its West Buttress. Last May, he also made his 10th Everest summit, bringing along a jersey from his son’s favorite soccer player, Brazil’s Ronaldinho. “I brought it along just for my son’s wish and fulfillment,” Tashi says. Tashi now has the goal of conquering the Seven Summits, the tallest mountains on each of the seven continents. While he’s looking for a sponsor, if he doesn’t find one, he’ll still aim high. “It just might take a bit longer,” he says. For sponsorship information, visit www.firstascenttashi.com. 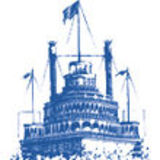